The Reformation began on October 31, 1517, when German monk Saint Martin Luther nailed his 95 Theses to the Castle Church door in Wittenberg, Germany. This was one of the greatest events of the past 1,000 years. 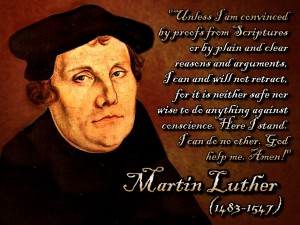 Saint Martin made a translation of the Bible from Greek and Hebrew into German. Soon all the countries of Europe followed his example by translating the Scriptures into their own languages. For the first time in history, the recently invented printing press made the Word of God available to all the people.

When he was commanded to appear before Emperor Charles V to answer for his writings, Saint Martin gave this fearless reply:

“I cannot submit my faith either to the Pope or to the Councils, because it is clear as day that they have frequently erred and contradicted each other. Unless therefore, I am convinced by the testimony of Scripture … I cannot and will not retract … Here I stand, I can do no other. So help me God, Amen.”
Hugh Latimer was famous as a preacher. He was Bishop of Worcester (pronounced WOOS-ter) in the time of King Henry, but resigned in protest against the King’s refusal to allow the Protestant reforms that Latimer desired. Latimer’s sermons speak little of doctrine; he preferred to urge men to upright living and
devoutness in prayer. But when Mary came to the throne, he was arrested, tried for heresy, and burned
together with his friend Nicholas Ridley. His last words at the stake are well known:

“Be of good cheer, Master Ridley, and play the man, for we shall this day light such a candle in England
as I trust by God’s grace shall never be put out.”

Does this candle burn in your heart?  Are the flames intense enough to carry on the work of those before us
that have been martyred for their love of Christ, the truth of God’s Word and the refusal to bow before sinful men?

Today around the world there are millions persecuted each day for their faith in Christ.  How can we honor
the memory of those who would not yield in their faith?  How can we continue to glorify our heavenly
Father?  How do we keep this “candle” lit?

First and most important we must continually pray and trust in God’s righteousness then we must proclaim the truth of the Gospel every chance we get.

“….Others were tortured and refused to be released, so that they might gain a better resurrection. Some
faced jeers and flogging, while still others were chained and put in prison. They were stoned; they were
sawed in two; they were put to death by the sword. They went about in sheepskins and goatskins,
destitute, persecuted and mistreated–the world was not worthy of them. They wandered in deserts and
mountains, and in caves and holes in the ground.  These were all commended for their faith, yet none of
them received what had been promised. God had planned something better for us so that only together with us would they be made perfect.” (Hebrews 11:35-40)

“Therefore, since we are surrounded by such a great cloud of witnesses, let us throw off everything that
hinders and the sin that so easily entangles, and let us run with perseverance the race marked out for us.
Let us fix our eyes on Jesus, the author and perfecter of our faith, who for the joy set before him endured
the cross, scorning its shame, and sat down at the right hand of the throne of God. Consider him who
endured such opposition from sinful men, so that you will not grow weary and lose heart.”  (Hebrews 12:1-3)