Remembering to Give Thanks

There is probably no such thing as a wholly thankless heart. Everyone at some time feels a sense of gratitude for benefits received. This seems to be instinctive, or if not instinctive then surely acquired at a very early age.

That a great many persons fail in the degree of their thankfulness we all know too well. Hardly anyone but has known remorse for his failure to express proper gratitude to father or mother or friend till it was too late. And most of us have felt the chill that comes to those who do acts of kindness for persons who receive them as matters of course without so much as a word of thanks. 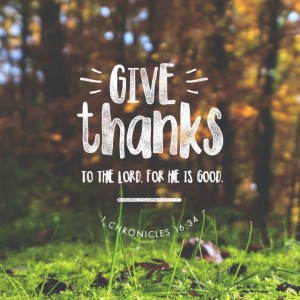 Even Christ appears to have suffered from such treatment, for after He had healed ten lepers and only one returned to give Him thanks, He asked rather sadly, “Where are the other nine?” (Luke 17:17). We dare not read too much into this, but it seems fair to assume that He wanted the cleansed lepers to thank Him, and was disappointed when they did not. But even here we must not conclude that these men were wholly thankless. They may quite easily have been grateful to friends and relatives, or even to total strangers who might have helped them in the past, and still have failed to express their thanks to the One who deserved it most.

This habit of thanking everyone but God is not confined to those nine lepers. Enter a plane, a train, a restaurant or any other place where modern civilized men and women meet and mingle and you will see evidences of the same spirit. You will hear thanks given and acknowledged right and left without so much as a mention of God.

Somewhere I read of the Christian farm boy who went to college and who in the dining room always bowed his head to thank God before beginning to eat. When some of his fellow students ribbed him for it, he grinned and said, “Hogs don’t thank anybody either when they eat their swill.” It might have been a bit direct, but I am sure everyone got the point.