(WNS)–Chinese officials asked Christians in southeast China’s Yugan county to replace their religious icons with portraits of President Xi Jinping—the Communist Party’s latest attempt to “transform believers in religion into believers in the party.” The officials said the Christians voluntarily removed 624 religious images, including pictures of Jesus and of the cross, and reposted 453 portraits of Xi. 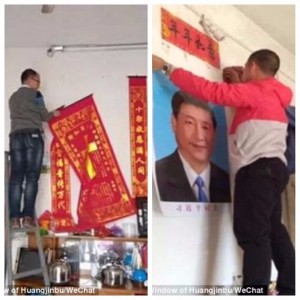 The process is aimed to convert Christians to the party through poverty alleviation and other schemes to assist the poor, the officials said. More than 11 percent of Yugan county’s residents live below the poverty line, and nearly 10 percent of the population claims Christianity. Liu, a resident of one of the county’s townships, said the villagers did not voluntarily take down the images. “If they don’t agree to do so, they won’t be given their quota from the poverty-relief fund,” he said.