In a comprehensive 79-page report released May 25, the inspector general looked at email use within the State Department from 1997 until now and found a litany of misconduct and violations. The report said longstanding weaknesses in communication extend beyond any one secretary’s tenure, but that does not excuse Clinton’s actions. 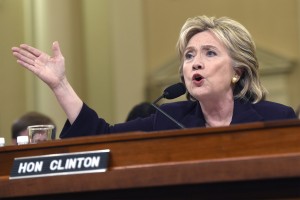 The report found Clinton’s use of a private email server for public business was “not an appropriate method” of preserving documents and caused a significant security risk.

“At a minimum, Secretary Clinton should have surrendered all emails dealing with department business before leaving government service and, because she did not do so, she did not comply with the department’s policies that were implemented in accordance with the Federal Records Act,” the inspector general said.

If she had followed department standards, Clinton would have saved all emails during her four years in office and provided them as soon as she stepped down in February 2013. Clinton did not provide any records until December 2014.

Now the front-runner for the Democratic presidential nomination, Clinton has repeatedly denied she violated any regulations during her tenure as head of the State Department.

On May 8, Clinton told CNN her email server was “absolutely permitted” within her department but admitted “it wasn’t the best choice.”

The news is a distraction as Clinton attempts to defeat presidential primary rival Sen. Bernie Sanders, I-Vt., and turn her full attention toward a general election fight against presumptive GOP nominee Donald Trump.

Clinton’s presidential bid has already suffered from her high unfavorability ratings, as many voters claim not to trust her.

The report faulted several former secretaries of state, including Colin Powell and Condoleezza Rice, for not following proper email standards, but it labeled Clinton’s infractions as particularly egregious. For example, Powell admitted using a private email address at times, but Clinton used her own separate email server—making her correspondence less secure.

The investigation notes Clinton never asked for permission to create a private server, which she had an obligation to do.

For its investigation, the inspector general interviewed current Secretary of State John Kerry and former Secretaries Madeleine Albright, Powell, and Rice. Clinton declined to comply with requests for an interview.

Congress has been digging through Clinton’s emails as part of the Select Committee examination of the Benghazi incident. For two years the committee has investigated how four Americans lost their lives in Libya under Clinton’s watch.

“While the emails have never been the focus of our investigation, it was necessary to obtain them,” he said. “If anyone wonders why the investigation is not yet complete, the malfeasance and numerous problems identified in this report are Exhibit A.”

Clinton has yet to comment on the report’s findings, but press secretary Brian Fallon tweeted earlier today Republicans will attack Clinton during her campaign because of her emails, but claimed the report shows her conduct was not “unique” within the department’s history.