(Health Impact) It has been nearly two years since a top scientist at the Centers for Disease Control (CDC) came forward as a whistleblower, revealing fraud in a top published research paper that has been used to refute any connection between vaccines and autism.

The mainstream media, controlled by Big Pharma advertising, ignored this story, and hoped it would fade away quietly. Likewise, members of Congress, for the most part, have not taken action in the public’s best interest and called hearings about the alleged fraud. In spite of the fact that Dr. William Thompson supplied documents and an affidavit to Congress via Florida Congressman Bill Posey, no action has been taken for almost two years.

This issue, however, is not fading away, but gaining momentum to the point that doctors, parents, and community leaders, among others, are becoming outraged. If Congress does not act soon, this anger is simply going to continue to boil until it explodes into something ugly.

VAXXED Film Documents Fraud in the CDC and Vaccine Studies 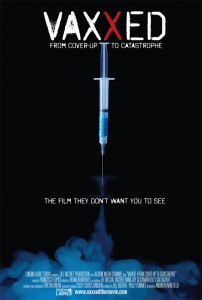 One of the main catalysts for rage against CDC fraud in vaccine studies here in 2016 is the documentary VAXXED, produced by Del Bigtree. Mr. Bigtree was the producer of the popular daytime medical show “The Doctors,” before taking on the film project of documenting the fraud in the CDC as revealed by Dr. William Thompson, the CDC whistleblower.

He recently was interviewed on the National Safe Child Show, and stated that the CDC whistleblower story was “bigger than Watergate.” Here is the interview:

The VAXXED movie crew has been traveling around the country and addressing communities in Q & A sessions, and more and more theaters are screening and showing the film.

They were recently in LA, in the neighborhood of Compton. Sheila Ealey, who describes herself as a “Warrior Mom” and is part of the VAXXED film team, addressed the crowd gathered there.

Much of the fraud revealed by the CDC whistleblower and documented in the film is that the CDC has known for many years now that African American boys are more susceptible to autism if they receive the MMR vaccine as scheduled by the CDC.

When you turn your face away from what’s happening in one community, then the greed decides that it has no respect of person, race, or nationality. And it trickles down to every other race of people. So what we have is a holocaust. Our children are being maimed, and are being killed.

And you’ve got a government sitting in Washington D.C. that doesn’t think enough to subpoena Dr. Thompson who came out and said what they were doing. So what we have to do today is take back our communities, take back our children. And how do we do that? We walk out of the doctors’ offices, and say “NO,” we’re not going to take that shot. Our children are our legacy. That’s all we have. Without our children, this country can’t stand. 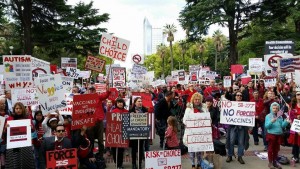 Caption: Demonstrations against mandatory vaccines and the removal of parental exemptions last year in California

Watch the entire impassioned speech by Ms. Ealey, herself the parent of a vaccine injured son.

Doctors Are Getting Fed Up with CDC Fraud Over Vaccines

The mainstream media likes to portray all medical doctors as pro-vaccine extremists, but this is simply not the case. Very many medical doctors have a variety of views on vaccines, and once they are aware of the CDC whistleblower, they too want Congress to hold hearings on vaccine safety.

One of those doctors is Dr. Brownstein in Michigan. He recently posted on his blog how he has been calling the Office of Government Reform on a near-daily basis since August, 2014–when Dr. Thompson came forward and claimed fraud was committed at the CDC.

Dr. Brownstein recorded one of his latest conversations with the government office, which clearly shows Congress does not want to deal with this issue.

I want you to hear what the phone calls are like (click here). I know this plays like a Cheech and Chong audio from the 1970’s, but this is our Government at work. Perhaps, I should say our Government at rest, since they are clearly not working. (Listen here.)

If you have not yet seen the film VAXXED, go see it and encourage others to do so also. If it is not in your community, request that it be shown there. Visit the film’s website for showings and more information.