CRANSTON, R.I. – Just as school districts around the nation are starting to financially recover from the Great Recession, employee unions are coming out of the woodwork to snag every dollar they possibly can.  That was happening last summer in the Cranston, Rhode Island school district, and district officials were not happy about it.

The Cranston Teachers Alliance was seeking a general raise of four percent, as well as benefit enhancements that would push those costs up by four percent, according to the Providence Journal.  Meanwhile the district was still wrestling with a “cumulative operating budget deficit of $2.3 million,” the newspaper said.

As the Journal summed the situation up, “If the school committee acceded to the union’s requests, it would have little or no money left to satisfy other vital needs, the committee and superintendent said in a statement.”

Of course the Cranston school committee helped create the standoff with the union by agreeing to a lot of fat, wasteful labor contracts in the past. It shouldn’t have been surprised when the union demanded even more goodies.

Automatic, annual step raises for teachers are good examples of the waste found in former union contracts. The raises are handed out to most members of the staff every year, based on seniority and graduate level college credits earned, with no regard to teacher effectiveness in the classroom. 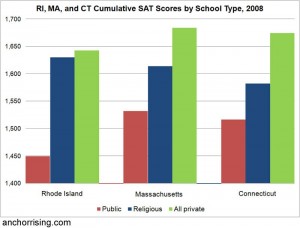 In 2013-14 the Cranston district spent slightly more than $1 million on step raises. And it’s a never-ending cycle. The district is forced to absorb that type of cost every year.  Besides the obvious foolishness of this practice from a financial standpoint, step raises can also be questioned from an academic point of view.

Student scores for Cranston students on state tests in 2013-14 were a mixed bag at best. Elementary students as a group did not meet state target scores for proficiency in math or reading, although they made significant progress in reading from the previous year. High school students did not meet the state target math, but did in reading. Middle school students met state proficiency targets in both math and reading.

Do those results suggest that perhaps Cranston has better teachers at the middle school level than the elementary or high school level? Maybe or maybe not, but is it really wise or fair to have all teachers on the same pay scale?

It would obviously make a lot more sense to hand out raises individually, based on each teacher’s success when it comes to instructing students.  That would not only cost a lot less money, but would serve as an incentive for the subpar teachers to improve, or perhaps find a different line of work.

Of course many other school districts across Rhode Island also issue general step raises every year.

The Warwick school district handed out $897,680 in step raises in 2013-14, despite the fact that the district went into the school year expecting costs to exceed revenue, and had exhausted most of its fund balance over the previous three years.

Again, a very mixed bag. Is there anything in those results that suggests that the entire teaching staff deserved a raise?