JERUSALEM, ISRAEL (ANS) – After spending a nice day in Jerusalem, I walked with a friend to the Light Rail, which would take me to my car on the other side of the City.  To my surprise the train was not running. Suddenly a Religious Jewish man came riding his bicycle down the tracks with loud speakers announcing that a large faction of Religious Jews (Heredim) were demonstrating on the tracks, so there would be no trains leaving the station.

The demonstration began because a large sect of the Heredim, refuse to abide by the “Recruitment Law”, and the Police went into their neighborhoods to arrest the draft dodgers. Instead of the young men going quietly with the police, rioting broke out. 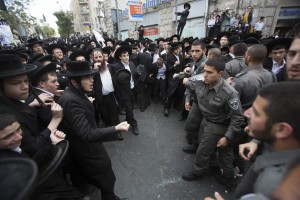 Hundreds of Ultra orthodox Jewish clash with Israeli police during a protest in Jerusalem on April 10, 2014, following the arrest of a haredi draft-dodger and against a bill intended to enforce the haredi enlistment into the IDF (Israel Defense Force). Photo by Yonatan Sindel/Flash90

The Heredim began to physically fight with the police and blocked the streets.  They smashed windows, burnt trash dumpsters and rolled them down the streets.  Friends visiting Israel were trying to drive to their apartment when they were blocked by the Heredim. They blocked, and even attacked others trying to get through the area. They called for a “Day of Rage” and Heredim around Israel rioted in their cities also. I eventually made it to my car and drove away in relief!

In Israel, military service is mandatory for most youth. They are drafted into the Israel Defense Force (IDF) at age eighteen.  Boys serve for three years and girls for two, but there are exceptions.  There are 1.5 million Arab Israeli citizens and their children are not required to serve in the IDF, though some volunteer. Also, from the beginning of the State of Israel in 1948 Religious Jewish Yeshiva Students (those who study Torah) were also exempt from serving. Their belief is to study Torah, not to work or join the military.

In 1948 when Israel became a nation, Prime Minister Ben Gurion, allowed this small sect of Religious Jews to be exempt from military service. Presently, that small sect has grown into the majority of Religious Jews also known as Heredim. It is believed by other Jews that this sect will become the majority in Israel because of their large families. The Movement for Quality Government in Israel has been working to draft all Religious youth.

“The Recruitment Law” was passed in 2014.  There is still dispute over the Recruitment Law and this large sect of Heredim decided not to adhere to the Law. “The masses of the House of Israel won’t rest and won’t keep quiet until the removal of the draft decree that hovers over the heads of Yeshiva students,” the faction’s message read.