Rogue Elements of the CIA Are Operating Against President-elect Trump 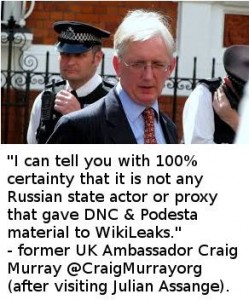 Alex Jones catches a lot of grief. Some of it he brings on himself by being over the top, but most of the criticism he receives comes from his practice of dragging into the news issues that otherwise would remain cloaked in silence.

Alex is certainly correct to stress that elements in the CIA, or someone claiming to be CIA, are planting stories in the media that Russia hacked Hillary’s emails and used the damning information to elect Trump.

The truth of the emails is not what is in question. It is their alleged Russian origin. There is no evidence for this claim. Wikileaks said the emails came to them as a leak from inside, not from an outside hack, and former top NSA official William Binney has said that if Russia was the source the NSA would have conclusive proof.

What is striking about this controversy is that it is the CIA, not Russia, that is interfering in American elections. The CIA is supposed to be concerned with foreign intelligence. It is not supposed to interfere in US affairs. Yet it is the CIA that is using fake news to delegitimize a president-elect. One member of this operation, Bob Baer, has called for a new election on the basis of the claim that Trump was elected by Russian interference.

The FBI does not support the claim of Russian interference. The importance of this issue is that it is rogue elements inside the CIA who are trying to prevent Trump from becoming president. The important question is: Why?

If neoconservative or military-security oligarchs are willing to so publicly in violation of law operate against an incoming president who could have them indicted and put on trial for high treason, wouldn’t these rogue operators also be willing to assassinate the president-elect?

The ruling oligarchy does not want any changes in policy toward Russia or the offshoring of US jobs. Clearly, they are willing to operate against a president-elect. Are they willing to go further?

The presstitute media by hyping these groundless charges are setting up Trump for assassination.