(WNS)–The Christian Coalition of America, once a $26 million political bastion of the Christian right, has fallen upon hard times. Its budget has shrunk to about $1 million, including income from a companion 501(c)(3). It might not have survived at all but for environmentalist cash: From 2007 to 2014 it collected at least $3.4 million from groups identified with environmentalism or leftist politics: the Green Tech Action Fund, the National Wildlife Federation Action Fund, and the Energy, Hewlett, Marisla, and Rockefeller foundations.

You might also find surprising the work of another recipient of environmental cash: the Evangelical Environmental Network. The group finances and oversees Young Evangelicals for Climate Action (YECA), one of several recent efforts to reach young evangelicals with a message of creation care and carbon cuts. Launched in 2012, YECA has trained and paid stipends of $1,000 to a handful of “Climate Leadership Fellows” at college campuses.

At Greenville College in Greenville, Ill., for example, a YECA fellow has organized a “Green Team” to promote “creation care and climate action.” The team has planted milkweed, participated in cleanup projects, and placed recycling bins in dorms.

At Grace College in Winona Lake, Ind., a YECA fellow has started a campus recycling program and is spreading awareness of climate change. Last September he recruited 13 fellow Grace students to participate in the People’s Climate March in New York City. The group carpooled to New York in a van and purchased carbon credits to offset the 11-hour drive.

Last year YECA’s national organizer, Ben Lowe, spoke about global warming to students at about 40 college campuses. His recent engagements include Cedarville University in Ohio, Grove City College in Pennsylvania, and Whitworth University in Spokane, Wash., where students have gathered over 450 signatures in a petition drive asking the Whitworth president and trustees to divest the school of fossil fuel investments.

The president of the Evangelical Environmental Network (EEN), Mitchell Hescox, told me his organization has promoted mercury regulations, chemical safety testing, and carbon dioxide emissions reductions, whether by regulation or market-based approaches. Hescox believes Christians should reduce greenhouse gases as a way of mitigating the effects of global warming on the world’s poor. “Climate change is a moral question,” he said. “It’s about the majority of scientific facts and a biblical call to care for the least of these.”

Of course, fighting climate change is also a top policy objective of the secular environmental left, where scientists and activists have long warned Western prolificacy is harming the planet. Many conservative Christians, and evangelicals in particular, have resisted that message as antithetical to biblical ideas of stewardship. A poll last year found that white evangelical Protestants are more likely than any other religious group to disbelieve global warming is occurring (39 percent are skeptics, versus 26 percent of all Americans). That skepticism may help explain why environmental foundations are investing large amounts of cash into organizations that preach a message of climate stewardship to an unreached people group: young evangelicals. 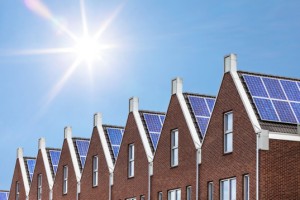 Although no hard rules exist against evangelical organizations accepting left-wing financial support, such funds could raise questions about who is influencing their agenda.

According to WORLD’s review of publicly available tax records, between 2008 and 2013 the Marisla Foundation, Rockefeller Brothers Fund, and Energy Foundation gave $1.25 million to EEN. In 2008 the Alliance for Climate Protection, founded by former Vice President Al Gore, gave $375,000.

Those environmental donors—along with the Hewlett Foundation, The Rockefeller Foundation, The Wyss Foundation, and the Surdna Foundation—have also given at least $9.2 million since 2002 to EEN’s parent organization, the National Religious Partnership for the Environment, which funds EEN as well.

EEN became well-known in 2002 for its “What Would Jesus Drive” campaign that promoted fuel-efficient cars—the implication being Jesus would shun a gas-guzzler. Its new youth-centered movement, YECA, two years ago started a website called Climate Prayer U.S. to promote prayer “for those impacted by climate disruption.” It offers a “Prayer of Repentance” that reads in part, “We have turned from your will, often abusing Creation for greedy and selfish purposes. Now we are facing global climate disruption and other crises as a result of our rebellion.”

Promoting wise stewardship and repenting of abuses is well and good, but is reducing American output of greenhouse gases like carbon dioxide—an essential plant nutrient—a moral imperative for Christians?

Hescox says yes, because global warming affects the world’s poor. “From Malawi to Guatemala to Honduras, people are already definitely being impacted on how they can grow crops, water shortages, food scarcity, being forced to move.” He denies his organization’s message is influenced by its secular donors. “We are pro-life evangelical Christians, and we will not accept and do not accept any funds that would allow us to change who we are.”

But some scientists and theologians don’t see climate change as a crisis. They have signed a statement, published by the Cornwall Alliance for the Stewardship of Creation, opposing climate change legislation and asserting global warming may be part of a natural cycle, and is likely to produce human benefits.

Cornwall spokesman E. Calvin Beisner said efforts to reduce global warming will prolong the poverty of the world’s poorest: “Cutting CO2 emissions means raising the costs of energy to everyone, but the poor are hurt more than anyone else by that.” Spreading that message among young evangelicals is a challenge, though: Beisner only lands speaking engagements at four or five Christian colleges a year. “That’s largely because the folks on the other side manage to keep the doors closed.”

Other organizations have promoted a climate change advocacy aimed at evangelicals. One is The American Values Network (AVN), led by Burns Strider, a former adviser to Hillary Clinton’s 2008 presidential campaign. AVN and its companion group, AVN Educational Foundation, have together received at least $900,000 since 2009 from environmental powerhouses, including Oxfam America, National Wildlife Federation Action Fund, NextGen Climate, and the Green Tech Action Fund.

The American Values Network, dedicated to mobilizing grassroots support of “American family and community values,” spent much of that money in 2009 and 2010 for environmental ads on billboards, buses, the internet, television, and Christian radio, including promotion of a climate bill. “As our seas rise, crops wither and rivers run dry, God’s creation cries out for relief,” one ad said. In 2012 the AVN Educational Fund launched the “Good Steward Campaign,” meant to “mobilize young evangelicals on dozens of Christian campuses.” (Hescox is one of the campaign’s featured speakers.)

The campaign promoted fossil fuel divestment and World Food Day and claims to have mobilized 30,000 evangelicals and Catholics to sign a petition urging Congress to extend the wind tax credit. (Congress did.)

Another organization involved in conservation, education, and global health projects, the New Venture Fund, hosts a “Creation Care Fund” that since 2007 has received a dedicated $1.8 million from Rockefeller Brothers Fund and the Energy and Hewlett foundations. The Creation Care Fund supported an “eight-week, 35-campus college tour that engaged students on environmental issues,” and supported the launch of Renewal, a Christian environmental network for college students.

Shortly before the Christian Coalition began accepting its own environmental grants, President Roberta Combs introduced a new energy platform ostensibly aimed at “increasing national security as well as providing clean air for this country and around the world.” Christian Coalition calls alternative energy a way to “reduce our dependency on foreign oil.”

In an email, Combs said the Coalition supported wind and solar power, coal power, and the Keystone XL pipeline as part of an “all of the above” energy policy. The Coalition’s outreach to its younger constituents comes through Combs’ daughter, Michele Combs, who in 2012 founded Young Conservatives for Energy Reform, which warns “America’s overdependence on foreign sources of energy” threatens the economy, national security, and U.S. troops. The group promotes biofuels, wind turbines, and solar panels, in addition to natural gas fracking technology and offshore oil drilling. It has hosted events in Washington, D.C., Florida, Ohio, South Carolina, Michigan, and elsewhere. Although Young Conservatives has received funding from the Christian Coalition, an assistant to Roberta Combs would not say whether Young Conservatives has its own IRS tax status.

“Yes—young evangelicals,” said Bob Inglis, a former U.S. congressman from South Carolina who spoke for a YECA event in March. “Their parents and grandparents, not so much.” Inglis, who founded the Energy and Enterprise Initiative to promote climate change policy among conservatives, said young people were more comfortable embracing new energy technologies.

That, of course, is good or bad depending on your perspective. James Wanliss, a physicist at Presbyterian College in Clinton, S.C., and the author of Resisting the Green Dragon, said the funding is part of a long-term effort by secular environmentalists to “green the gospel” and make Christians eco-centric.

Young people have a hard time discerning legitimate environmental concerns from dubious ones, he said, because they’re bombarded in culture and in school with the message that “we’re frying the earth and we’re all going to die, and it’s all your fault.”

Wanliss said there isn’t enough balance on campuses: “It’s very difficult to get an education when you only hear one side of the story all the time.”