“Yerushalayim built up, a city knit together, to which tribes would make pilgrimage, the tribes of Hashem, —as was enjoined upon Yisrael— to praise the name of Hashem.” Psalms 122:3

After meeting last week with Israeli Deputy Foreign Minister Tzipi Hotovely last week,  a Romanian politician has announced their nation will be moving their embassy to Jerusalem. This will make Romania the fourth nation to do so and the first European Union country to break ranks and recognize Jerusalem as Israel’s capital. 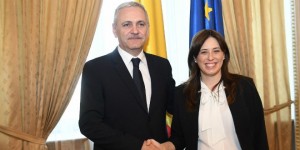 Romanian Prime Minister Viorica Dăncilă, a Social Democrat, proposed the move to his government last Wednesday, April 11, and the process moved forward quickly. In an interview with the Romanian TV channel ANTENA 3 on Thursday, Israeli Independence Day, Liviu Dragnea, the president of the Chamber of Deputies and a member of Romania’s ruling party, told viewers that the decision was made Wednesday night to move the embassy.

The announcement comes after Hotovely met with Romania’s prime minister and foreign minister and heads of both houses of the parliament in Bucharest ten days ago. Hotovely described this meeting as the first leg of a campaign to persuade countries to move their embassies to Jerusalem.

“I congratulate the speaker of the Romanian parliament [Liviu Dragnea] on his announcement today to the media according to which Romania will commence the process of moving the Romanian embassy to Jerusalem,” Hotovely wrote on her Twitter account last Thursday. “This was the spirit of our meeting last week in Bucharest, and I hope to see the Romanian Embassy in Jerusalem soon.”

The first country to move its embassy to Jerusalem will be the United States when it opens at a temporary location in May. This will be followed by Guatemala and Honduras. The only official embassy in Jerusalem at the time is the International Christian Embassy Jerusalem (ICEJ).

Hotovely is planning a trip to the Czech Republic next week as the next step in her embassy effort.

Prime Minister Benjamin Netanyahu announced on Thursday that at least six countries are in talks with Israel to move their embassies to Jerusalem.

“We’re happy about [US] President [Donald] Trump’s decision to move the embassy here. It says a simple thing: Peace must be based on truth,” Netanyahu said at an Independence Day event at President Reuven Rivlin’s official residence. The event was attended by many foreign diplomats from at least six countries.

“Recognizing reality is the way to build peace. You cannot build peace on the basis of lies because it crashes against the rocks of reality,” he said to the diplomats. “The fact that Israel has a capital city, that the Jewish people has had a capital city for 3,000 years named Jerusalem, is undeniable. It is time to acknowledge that fact.”

“I am happy to say there are at least half-a-dozen countries seriously talking with us about relocating their embassies to Jerusalem, and thank you Guatemala for doing so. There will be more following in your steps,” the prime minister said.

“There is a simple principle, you know it — ‘first come first serve,’” Netanyahu added. “I have decided that the first ten embassies that arrive here will get preferential treatment. We’ll help you!”