Ron Paul: ‘The Evidence Is Very Clear’ that the US Has Aligned Itself with al-Qaeda in Syria 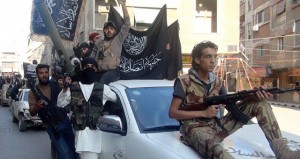 “This isn’t the first time that the evidence is very clear that we have aligned ourselves with al-Qaeda when we think it’s temporarily of benefit to our foreign policy,” declared former United States House of Representatives member and presidential candidate Ron Paul last week in regard to US policy toward Syria and the developing situation in Idlib, Syria. Paul made the comment in an interview at RT focused on recent developments in Syria.

Paul’s assessment came shortly after the interviewer played video of Brett McGurk, the US special presidential envoy to the Global Coalition to Counter ISIL, calling Idlib a year back “the largest al-Qaeda safe haven since 9/11.”

The US government’s antagonism toward efforts by the Syria government, aided by allied nations, to take back control of Idlib, makes more sense when US foreign policy toward Syria is understood in the context Paul provides in the interview. Paul explains that, while the US has used opposition to al-Qaeda “as the excuse” for US intervention in Syria, he believes instead “we’re there for other reasons.” Those reasons, Paul says, include opposition to Iran and Russia that are supporting Syrian military forces, as well as that “we think al-Qaeda will help our position — the United States position — to get rid of [Syria President Bashar al-Assad].”

Many Americans tolerate the US “trying to maintain a modern-day empire” via interventions including in Syria because they are not well informed about the matter, suggests Paul. To help cure this problem, Paul says he is trying with the Ron Paul Institute for Peace and Prosperity, which he founded after leaving the House of Representatives, “to alert people to the danger that is involved with our foreign policy.”

So what should the US do in Syria? “Leave as soon as possible,” advises Paul.