Running the race with perseverance 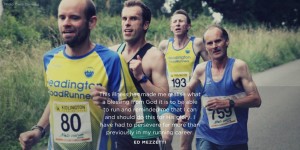 As the London Marathon took center stage recently, we rewind the clock to 2017 and Ed Mezzetti’s reflections on a very personal challenge to run with perseverance…

I was pretty shocked when I got the diagnosis. I had a blood clot in my lungs. My condition was far more serious than I realized.

While training for October’s Yorkshire Marathon, I had picked up what seemed to be a thigh-muscle strain, so had a few days’ rest. When I resumed running, I was strangely out of breath and couldn’t work out what was going on. I was a decent club-standard runner, but now an easy jogging pace felt like I was giving my all at the end of a race.

A couple of blood tests proved inconclusive, although something was clearly wrong, but then my calf on the same leg swelled up as well and prompted a trip to A & E. A few hours later, I was told I had a pulmonary embolism or a PE as medics call them. I hadn’t heard of the condition before, but basically, it’s a blood clot that moves to your lungs. It seems that the initial clot was what I thought had been a muscle strain.

All this meant I had to have some complete rest before gradually building up my fitness again. It’s been a long journey since, but I got reasonably close to my previous levels again and was hopeful of taking my place on the start line for Sunday’s London Marathon. Then, just as I was eyeing up a couple of 20-mile runs to give my training that final push, I felt that pain in my leg again. I was diagnosed with a new blood clot – a deep vein thrombosis (DVT). This time, my recovery shouldn’t take as long, but Sunday’s race in the capital has just come too soon and I have had to defer my place to next year.

The whole experience has been a real challenge, both as a runner and as a follower of Jesus. I didn’t tick any of the boxes for someone likely to experience a PE – most people are much older and less healthy than me. It was hard not to say ‘why me, God?’

There is lots of running and athletics imagery in the Bible, which I have found myself relating to more and more. Hebrews 12 v 1-2 was always a favorite and I have spoken on those verses quite a few times.

Therefore, since we are surrounded by such a great cloud of witnesses, let us throw off everything that hinders and the sin that so easily entangles. And let us run with perseverance the race marked out for us, fixing our eyes on Jesus, the pioneer and perfecter of faith. For the joy that was set before him he endured the cross, scorning its shame, and sat down at the right hand of the throne of God.

Running with perseverance is absolutely crucial in long-distance races and the finish is a great prospect to keep in mind as your legs pound away. How much more encouragement do we have in looking to Jesus – the one who starts and finishes our faith! In Him we have the guarantee that we will cross the finish line to eternal life and we get to run the race with Him by our side.

These verses have taken on a new significance for me in the last seven months. Although the build-up to the London Marathon sees even the most experienced of athletes feeling butterflies in their stomachs, it would have been great to join the 35,000 runners in this year’s race. But even to get to this point, I have learned a huge amount about perseverance. Running marathons is not a new thing for me, this would have been my 11th, but the last seven months have been anything but routine.

This illness has made me realize what a blessing from God it is to be able to run and reminded me that I can and should do this for His glory. I have had to persevere far more than previously in my running career. I remember the first time I jogged a simple, slow mile and how elated I felt at doing something that was utterly normal before. I was so used to banging out the miles at a good pace in training without thinking twice and now running this most basic distance felt a real achievement.

The whole experience has also challenged me over where I seek my identity. My temptation has often been to say that I’m a runner, but now that, at least temporarily, couldn’t be the case! In a very practical way I needed to realize I am a Christian first and everything else, including running, comes below that. It’s still a battle to keep that focus, particularly as my form and fitness pick up again.

Runners can often obsess about chasing personal bests [PBs] as we push ourselves to go faster than before. There is nothing wrong with striving to make the most of our gifts and that links to this blog I wrote, but the challenge is to remember where my focus should be, that I’m running for an audience of one as it says on my blue wristband. While I train for and race, my prayer is that I remember how awesome it is to worship our Heavenly Father as I enjoy His good creation of sport.

Having a PE has probably been the toughest experience of my sporting life. Having a more ‘straight-forward’ injury seems easier to rationalize whereas this has been confusing and distressing at times. However, I know I’m called to run with perseverance as a Christian and an athlete. That is true now and whenever I am next able to take on the famous 26.2-mile distance.