In an emotion filled interview at the conclusion of Sunday’s NFC Championship Game, Seattle Seahawks quarterback Russell Wilson perfectly reflected the powerful optimism that faith in God brings.  For a young man headed to his second Super Bowl and on top of the NFL in only his third season, he also displayed the refreshing humility of a true leader of men and follower of Christ. His humble optimism is a key component to a faith in God which is often derided or dismissed by the non-believer, and far too often forgotten or taken for granted by the believer. 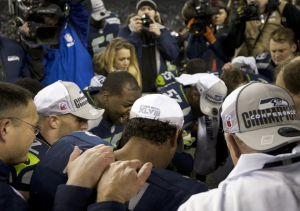 For Russell Wilson and the entire Seattle Seahawks team, much of Sunday’s contest with the Green Bay Packers appeared to be a day of reckoning. Heading into the day, Seattle was riding a seven game winning streak and regained the swagger which carried them to a dominant 2013 season and a crushing 43-8 victory in Super Bowl XLVIII over the Denver Broncos. That swagger was quickly turned into moments of doubt for many as key turnovers and an uncharacteristically dismal performance by Wilson early gave the Packers a 16-0 lead at halftime.

As he alluded to in his post-game interview, the third-year quarterback from Wisconsin utilized his faith in God to not give up on himself or his team and more importantly presented the image of optimism to inspire his teammates to carry forward to the goal. That goal was realized in the early minutes of overtime, as Wilson rebounded from his horrendous start to win the game with 35-yard strike to Jermaine Kearse, who himself atoned for an otherwise forgettable performance, to lift the Seahawks into Super Bowl XLIX  in Arizona against the New England Patriots on Feb 1st.

Just hours before the game Wilson tweeted: “All my hope is in You Jesus! You are my anchor that is never shaken!” Shortly after the win, he added another tweet saying: “Headed back to the Super Bowl!!!! QBs in the House! Glory to God! One Mission. #MakeThemNotice.”

After praising the Packers on their season and their competitiveness, Wilson went on to thank his teammates for not giving up on him and themselves. “God’s preparing me for these situations,” an emotional and tearful Wilson told a Fox Sports reporter at the conclusion of Seattle’s 28-22 comeback victory, “He’s prepared this team.”

That Russell Wilson spoke of the preparation in relation to his faith is key. God does not win football games, no more than He bestows riches upon his followers simply for the sake of doing so, but it is the inner strength one gains from a relationship with the Creator that prepares us for the adversities and trials that life brings to all of us, believer and non-believer alike. It is that inner belief that if we carry on, so long as we persevere, that “something good” will happen. That if our God is strong, while we ourselves need to do the heavy lifting, we will be guided in a positive direction. This does not always mean victory in a football game or competitive pursuit, but it will always lead you in the proper direction toward inner happiness. 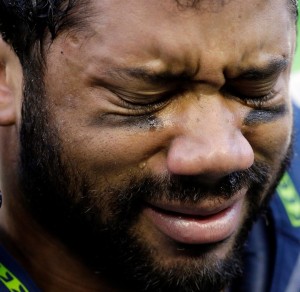 Wilson’s eloquent and perfectly succinct praise of God should serve as a lesson to the believer, in that what the Lord’s love provides, was never meant to be an umbrella to protect us from all threat, heartbreak and failure, but rather prepares us to find the “extra 10 percent” within us that often separates winners from losers. For the non-believer, particularly the antagonistic atheist who bemoans such public displays of Faith, it is not with reproach but sincere sadness that I find it impossible to verbally express the joy that is God’s love. If you’ve never felt it, you cannot begin to understand it. Even in the darkest hour, there is a feeling, a love that burns inside of you that let’s you know things will turn out right, that we just need not give up.

Russell Wilson knows that feeling. In addition to the joys of victory, the emotions coming through this championship quarterback were also enhanced by the joy and love of a relationship with Christ. That is a beautiful thing. It’s carried Wilson throughout his career, when many an expert wrote him off as too short, too weak-armed and not enough of a prototypical pocket-passer to succeed at the game’s highest level. In addition to his physical gifts, intelligence, dedication and leadership abilities, his relationship with God has served as a guiding force in his success. As was clearly obvious to the Green Bay Packers and reflected in his post-NFC Championship Game interview, Russell Wilson’s faith provides him a powerful sense of optimism which helped him propel the Seattle Seahawks on the road to Arizona.

After all, as Russell Wilson stated, “God is good all the time. Every-time!”