Russia-China Deals: Another Nail in the Coffin for U.S. Dollar

(The New American)The Kremlin and the Communist Chinese regime, through their state-controlled “companies,” have been signing major deals with each other that analysts say will contribute to the acceleration of the U.S. dollar losing its status as the global reserve currency. Two agreements in recent weeks deserve special attention: a $400-billion Sino-Russo energy contract, and a separate deal between two of Russia and China’s largest financial institutions to bypass the dollar in favor of domestic currencies. The geopolitical implications of the quickly-moving trends are monumental — especially for the United States, where the end of dollar hegemony will lead to potentially unprecedented economic upheaval.

Of course, it is hardly a secret that the upper echelons of the globalist establishment are plotting to end the decades-old reign of the U.S. dollar. As top insiders have openly admitted, the end goal is to replace it with a planetary monetary regime and global currency operated by the International Monetary Fund, which would act as a sort of world central bank. All of it has been happening with the deliberate connivance of Western globalists, including the banking cartel that owns and controls the Federal Reserve. The IMF is already talking openly about moving its headquarters to Beijing and turning its Special Drawing Rights (SDR) into a true global currency.

Now, the trends appear to be picking up speed. The U.S. central bank, for example, continues conjuring outlandish amounts of currency into existence under the guise of keeping interest rates low and stimulating an “economic recovery.” Around the world, foreign governments and central banks — particularly the regimes ruling the so-called “BRICS”: Brazil, Russia, India, China, and South Africa — are reacting by quietly moving away from the U.S. dollar. Authorities in those nations have also been purchasing massive amounts of gold, which countless experts say is having its price suppressed by Western central banks.

The latest Sino-Russo agreements, though, mark an important milestone in the ongoing flight from the dollar. The first deal on May 20, dubbed the “Agreement on Cooperation,” was inked in Shanghai between two state-owned banking leviathans as Communist Chinese dictator Xi Jinping and Russian strongman Vladimir Putin looked on approvingly. As part of the deal, the Communist Chinese regime-owned Bank of China and the Kremlin-owned VTB agreed to settle transactions in yuan and rubles.  “Under the agreement, the banks plan to develop their partnership in a number of areas, including cooperation on ruble and [Chinese] renminbi settlements, investment banking, inter-bank lending, trade finance and capital-markets transactions,” VTB said in a statement.

Putin was glowing, too. “Our countries have done a huge job to reach a new historic landmark,” he was quoted as saying in news reports, adding that bilateral trade was growing quickly and set to expand further in the coming years. “China has firmly settled in a position of our key trade partner.… If we sustain this pace the level of bilateral trade of $100 billion will be reached by 2015 and we’ll confidently move on.” Other Russian and Chinese officials also expressed delight with the developments as the Obama administration blabbers about “climate change,” red lines, and gun control. Obama has also invited Communist Chinese and Russian troops to train on U.S. soil.

Most importantly, perhaps, the agreement sidelines the U.S. dollar, which has served as the global reserve since the end of World War II. At first, America’s currency obtained the role by default, maintained largely because it was backed by gold as much of the world lay in ruins. Following then-President Nixon’s final severing of the remaining tenuous link to precious metals, the dollar remained on top because energy supplies around the world were priced in dollars — the so-called “petrodollar.” While the status quo has offered some temporary “benefits” to the United States, allowing it to export fiat currency in exchange for goods and services, for example, the biggest downsides of the system appear to be approaching quickly.

After the banking deal, Putin and Xi also oversaw the signing of a gargantuan natural-gas contract between state-controlled energy giants owned by their regimes. Under the $400-billion agreement, apparently years in the making, the Kremlin’s Gazprom will deliver some 40 billion cubic meters of natural gas to the state-controlled China National Petroleum Corporation (CNPC) each year. While most of Gazprom’s foreign contracts for energy are still priced in dollars, analysts said the Sino-Russo deal was a significant move in terms of undermining the U.S. currency in international trade. 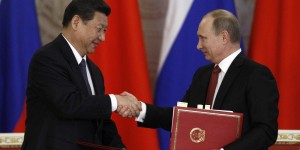 Meanwhile, in Europe, Gazprom bosses are also threatening to start seeking payment in euros. “This shows that in principle there is nothing impossible — you can switch from dollar to euro and from euro, in principle, to rubles,” Alexander Dyukov, CEO of the massive state-owned energy giant’s oil division, was quoted as saying in Russian news reports while touting the ditching of the U.S. dollar in international trade. The dictatorship in Belarus has already announced its support for the move.

The regimes also released a joint Chinese-Russian statement amid the deals suggesting that more was yet to come. “The sides intend to take new steps to increase the level and expansion of spheres of Russian-Chinese practical cooperation, in particular to establish close cooperation in the financial sphere, including an increase in direct payments in the Russian and Chinese national currencies in trade, investments and loan services,” it said. In other words, expect more orchestrated efforts to sideline the dollar in favor of other currencies in the not-too-distant future.

Independent analysts also warned of the growing pressure on the dollar. “Taken alone, these actions do not mean the end of the dollar as the leading global reserve currency,” explained author and currency expert Jim Rickards, a partner at Tangent Capital Partners who has written extensively on the global monetary system. “But, taken in the context of many other actions around the world including Saudi Arabia’s frustration with U.S. foreign policy toward Iran, and China’s voracious appetite for gold, these actions are meaningful steps away from the dollar.” The Communist Chinese regime remains the largest single holder of dollars and dollar-denominated assets, but that could change quickly.

Meanwhile, aside from the major deals signed in the presence of Putin and Xi, Kremlin-funded media and even some elements of the establishment press have been highlighting Russia’s ongoing campaign of de-dollarization. “Over the last few weeks there has been a significant interest in the market from large Russian corporations to start using various products in [Chinese] renminbi and other Asian currencies, and to set up accounts in Asian locations,” Deutsche Bank’s Russia chief Pavel Teplukhin was quoted as saying in RT and the Financial Times. Deutsche Bank bosses, the Financial Times, and the Chinese Communist Party Central Committee were all represented at the Bilderberg summit two weeks ago.

Establishment analysts were publicly busy trying to paint the deals as a joint effort between Russian and Chinese authorities to undercut the United States based on “mutual strategic interests” as opposed to something more sinister. However, as The New American reported in late May, the deal also seems to confirm the revelations of Anatoliy Golitsyn, the highest-ranking KGB agent to ever defect to the West. In two books, Golitsyn argued that the “Sino-Soviet Split” was a long-range deception to fool the West. “When the right moment comes the mask will be dropped and the Russians with Chinese help will seek to impose their system on the West on their own terms as the culmination of a ‘Second October Socialist Revolution,’” he wrote in 1995.

Of course, the privately owned Federal Reserve is itself demolishing the U.S. dollar at warp speed via “quantitative easing,” bailouts for crony mega-banks around the world, and other wealth-transfer gimmicks. At the same time, the federal government is pummeling what remains of the U.S. economy with a broad range of schemes such as FATCA, citizenship-based taxation, avalanches of unconstitutional regulations, executive decrees rationing energy, outlandish borrowing and spending sprees, and more. Combined with the orchestrated global move away from the dollar by the establishment and its BRICS allies, analysts say time is running out quickly for Americans to stop a looming economic calamity.