Russia declares that the European Union and the BRICS nations adopt a single “virtual” currency! 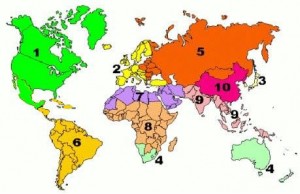 “An initiative to create a joint digital currency for BRICS countries and the Eurasian Economic Union (EEU) has been proposed by the Central Bank of Russia … the issue of a common cryptocurrency for a number of countries is very promising, more than that for a single nation …It makes sense to set one equivalent for all payments”.

And, since the Mark of the Beast will be a cashless, virtual cryptocurrency covering the entire world, Chritsian should be most interested in this development!

“Leaders of the BRICS emerging market nations launched a $100 billion development bank and a currency reserve pool in 2014 in their first concrete step toward reshaping the Western-dominated international financial system. The long-awaited bank will be called the New Development Bank.”

“It is the first major achievement of the BRICS countries – Brazil, Russia, India, China and South Africa – since they got together in 2009 to press for a bigger say in the global financial order created by Western powers after World War Two and centered on the International Monetary Fund and the World Bank.”

Quite frankly, the Western-dominated IMF and World Bank have policies that are too restrictive and too punitive to allow the Supernations within BRICS to set up the planned regional governments. Notice the Supernations which will benefit from this “New Development Bank”.

3) Supernation #9 — ASEAN – South and Southeast Asia — of note here is that, even though India is not presently a member of ASEAN, the Club of Rome Plan lists her as a member. Currently, the new Modi government of India is negotiating with ASEAN to become a member very shortly.

Therefore, we can see how the development of this “New Development Bank” will greatly stimulate the formation of these Supernations and will move the entire process along. God’s plan for the nations of the world to reorganize into 10 Supernations is proceeding quickly!

This announcement is a key element in the world single virtual currency foretold in Rev 18:16-18 ‘Mark of the Beast’.