“No weapon formed against you Shall succeed, And every tongue that contends with you at law You shall defeat. Such is the lot of the servants of Hashem, Such their triumph through Me —declares Hashem.” Isaiah 54:17

Russia could be about to supply the advanced S-300 anti-aircraft missile system to Syria and has warned of “catastrophic” consequences for all sides should Israel attack the missile batteries, according to a report in the Russian daily Kommersant, citing anonymous military sources.

According to Kommersant, Russia could supply the long-range surface-to-air missiles free of charge to Damascus within the framework of its military aid to the Bashar Assad regime.

The report said that components of the S-300, including radar stations, control posts and  launchers would soon be delivered to Syria by the Russian military either by air transport or via the Russian Navy, which has a base at Tartus on the Syrian coast. 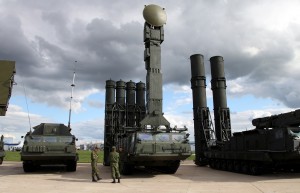 Russia, Samara, May 2017: S-300 anti-aircraft missile system on a city street prepared for the Victory Day parade on a spring sunny day. (Shutterstock)

Russian Foreign Minister Sergei Lavrov said last week that following a joint United States, French and British strike on Syria in response to a chemical weapons attack by regime forces, Moscow was no longer morally bound not to supply Assad with the S-300 system.

“We promised not to do it around a decade ago at the request of our partners, and we took into consideration their argument that this would destabilize the situation, despite this [S-300] being a purely defensive system,” Lavrov said.

“We heeded their call. But now we have no such moral obligation,” he added. Russia had originally signed a contract in 2010 to supply Syria with four S-300 batteries, however after the outbreak of the Syrian civil war the following year and following pressure from Israel, Moscow cancelled the deal.

Kommersant noted that while Jerusalem has yet to respond to the current reports that Moscow will supply Syria with the anti-aircraft system, whose range extends into Israel itself, former high-ranking military officials, including the ex-head of military intelligence Maj.-Gen (ret) Amos Yadlin have said that the IDF would likely react by striking the S-300 batteries.

“If I know the air force well, we have already made proper plans to deal with this threat. After you remove the threat, which is basically what will be done, we’re back to square one,” Yadlin said in regard to the possible deployment of the S-300 in Syria during an interview with Bloomberg news last week.

According to Russian military experts interviewed by Kommersant, it would take some three months to train Syrian officers to manage the S-300 and during that time, Russian military advisers would be stationed at the batteries alongside Syrian experts. If Israel were to decide to inflict rocket strikes on the locations of the S-300 deployment, the consequences, according to Kommersant’s sources would be “catastrophic for all sides.”