Sadly, America’s Not the Freest Country in the World 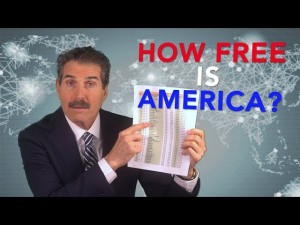 Is America the world’s freest country? Sadly, no.

When researchers first started doing detailed international comparisons, the USA came in second or third. This year, however, we ranked 17th. The comparison I cite is the newly released Human Freedom Index, compiled by the Fraser and Cato Institutes. They compared economic freedoms such as freedom to trade, amount of regulations and tax levels, plus personal freedoms such as women’s rights and religious freedom. Their new report concludes that the world’s freest countries are now:

“The United States used to have one of the freest economies in the world,” Index co-author Ian Vasquez says. “It used to be a two, three or four, and then government started to grow [and] spend more.”

Republicans and Democrats, under Presidents Bush and Obama, voted for increases in spending and regulation. Obama tried to make tax increases sound harmless. “Those who are more fortunate are going to have to pay a little bit more.”

The result was that we fell farther from the top of the freedom ranking. Switzerland now takes first place. It has comparatively little regulation, low taxes, a free press and personal freedoms such as same-sex marriage.

A good ranking matters, not just because freedom itself is a good thing, but because economic freedom allows people to prosper. Consider the story of Hong Kong, No. 2 on the overall freedom list (but No. 1 in economic freedom). In just 50 years, people in Hong Kong went from being among the poorest in the world to among the richest.

Prosperity happened because Hong Kong’s government puts few obstacles in the way of trying new things. It took me just a few hours to get legal permission to open a business in Hong Kong. In New York, it took months. In India, I didn’t even try—it would have taken years. That’s a reason India stays poor. Bureaucrats have the power to review and reject most any new idea. Fewer new ideas get tried.

The absolute worst places to live are countries that lack both economic and personal freedom. Those are the places at the bottom of the freedom ranking:

(Totalitarian North Korea wasn’t ranked because the researchers couldn’t get accurate information.) Syria ranked so low mostly because of the war. You aren’t free if you worry you might be killed. Second-to-last place Venezuela was once the richest country in Latin America. Then socialists promised to spread the wealth.