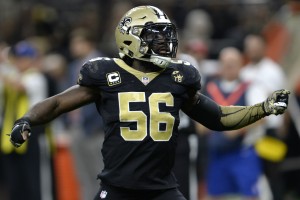 Demario Davis serving others is nothing new. Just in the past year, the New Orleans Saints star linebacker has filled backpacks with toys to give to kids detained by U.S. Border Patrol, worked for bail reform to help the large numbers of people in jails who have not been convicted of a crime, and been honored by Time magazine for “changing the South.”

This week, he made Christmas come early for a family in his community. Teenager Samuel Butler was celebrating Mardi Gras on Feb. 13 when he was shot in the head in downtown New Orleans. The bullet caused major damage to the right side of his brain, and doctors had to cut out a portion of his skull to relieve pressure from the fluid that was building up. The emergency surgery saved Butler’s life, but the bullet and its fragments still remain lodged in his head.

Butler can no longer walk or speak, he receives his meals through a tube, and medical costs (for physical therapy and continued care) are mounting. He is cared for by his aunt, Allieta, because Samuel’s mother passed away three years ago. The family created a GoFundMe page to ask for assistance, and noted that they needed a van with wheelchair accessibility to transport Samuel.

That’s where Davis, who had been developing a relationship with the Butler family, sprung into action: Davis worked with Superior Vans and Mobility to get the van, and the company also made a donation to Butler’s family.

“Sam, what he’s going through, I think that requires so much inner spirit and strength,” Davis said, “and people can’t even comprehend how much of a warrior he is, and that’s motivation for me.”

Davis’ servant heart, he says, comes from his mother. “My mom helped me realize that life’s not about me; instead I need to become a servant so that God’s love and power can become real to others through my life,” Davis says. “This is evident in the life of my mom. My mom has always been a servant first. She continues to regularly speak truth in my life through the Word of God and through her loving actions.”

“You, my brothers and sisters, were called to be free. But do not use your freedom to indulge the flesh; rather, serve one another humbly in love.” — Galatians 5:13