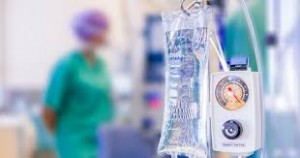 (NaturalHealth365) Two Vanderbilt University Medical Center studies have found that saline in IV bags can be detrimental to your health. In fact, patients fare much better when given balanced fluids more closely resembling the liquid portion of blood. Unfortunately, this kind of information hasn’t reached the ‘powers that be’ within most hospital facilities.

Researchers found a link between kidney damage and kidney failure and the presence of saline in the IV bags. They believe using the blood based fluid (balanced crystalloids) can reduce the risk of complications, improve kidney health and increase survival rates across the boards.

Blood based balanced crystalloids – instead of saline – in IV bags could save over 100,000 lives in the U.S. per year

For the research, more than 13,000 emergency department (ED) patients and 15,000 intensive care unit (ICU) patients requiring an IV were assigned either balanced fluids or saline. Incidents of kidney damage and kidney failure were around 1 percent lower in the balanced fluids group.

While this difference may sound statistically insignificant, it is important when viewed in terms of those requiring medical treatment population-wide. Every year, millions of people receive intravenous fluids.

One percent translates to many thousands of patients each year. The authors estimate making the change to fluids resembling blood could result in 100,000 or more fewer incidents of injury and death related to kidney failure in the U.S.

One of the Vanderbilt studies compared balanced crystalloids (Plasma-Lyte A or lactated Ringer’s solution) with saline among 13,347 adults treated with IV crystalloids. While hospital-free days did not differ between the groups, the ones receiving solutions more similar to blood had around a 1 percent lower incidence of kidney events within 30 days.

Kidney damage, kidney failure and premature death were all reduced

Saline, which has been used in medicine for over a century, contains sodium chloride in high concentrations of. It is very similar to table salt. However, a more balanced approach can yield more positive health effects.

The results have already inspired a change in health practices at Vanderbilt, the site of the research. And, these results were published in the New England Journal of Medicine on February 27, 2018.

First, it should be noted that millions of people are walking around with undiagnosed dehydration issues – which include brain fog and fatigue. Simply put, without adequate hydration, kidneys will break down – over time.

In addition, the kidneys benefit quite a bit from a diet rich in organic fruits and vegetables. Citrus fruits (rich in vitamin C) are particularly beneficial to the kidneys.

And, of course, let’s not forget the value of cranberry extract to help ward off kidney infections and keep them functioning at optimal levels. Drink plenty of pure water (free of toxins) to flush out the kidneys, and cut back on caffeine, alcohol and food containing high amounts of preservatives.

All of this will help to improve your quality of life.