SALVATION BY STATE AND SCHOOL

Imagine if there were no Christmas, no Jesus Christ, and we had to look for our salvation to those smartest of smart people, our political leaders and our educators. Whereupon half of my readers wake up screaming.

Now it is the business of a savior to see to things that are wrong and put them right. Jesus Christ came into the world to deal with sin and death. Through Christ, God’s solution is to regenerate one human heart at a time, by faith in Jesus Christ, for as many centuries as it takes.

But our worldly saviors, our rulers and our teachers, want to move much faster.

It’s easy to depict our schools and universities as hatcheries of tomfoolery, producing battalions of self-anointed puddin’-headed intellectuals fit only for low comedy. It’s especially easy when the universities, of their own free will, lend themselves to such buffooneries as… zombie studies.

Here we are with an associate professor at Kent State trying to scare up funds to study what to do if confronted by a zombie apocalypse. Somebody’s been playing too many video games. Only at the very end of the news report do we discover that the zombie apocalypse study is merely a ploy to arouse interest in Science by “tying it in” with zombies. We are left uncertain as to whether anyone involved in this enterprise understands that there’s no such thing as zombies.

This is what happens when everybody goes to college. And where do they come from, these hordes of college students who must be titillated with zombies before they can take any notice of the sciences? They come from our vast, costly, and almost indescribably inadequate public school system. 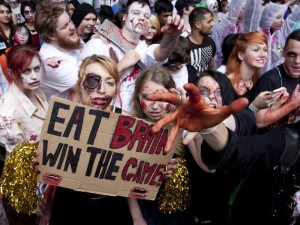 Spurred by some vague intimation that all is not quite as it should be with the public schools, Oklahoma teachers and legislators have cooked up a scheme to fix the schools by lowering the boom on… bullying. That’s why kids come to college thinking zombies are real—because of bullying? So the plan in Oklahoma is to give schoolteachers the power to fine bullies and their parents.

Whether by carelessness or by design, the saps in the state house seem to have forgotten to define “bullying.” We know that in liberal paradises, like Canada or California, “bullying” can only be done by members of hated “privileged” groups, to members of cherished minorities, and never the other way around. A single atheist can shut down a whole town’s Christmas celebration; but a lone Christian who claims that his school district’s commitment to transgender folderol is un-inclusive and offensive, and it hurts his feelings, will only be vilified as a Hater.

If the current goings-on at universities are any clue, punishable “bullying” in Oklahoma schools is likely to include saying something, anything, that any member of a cherished minority doesn’t want to hear, or inadvertently committing some act of “microaggression” that you didn’t even know you did until they bust you for it.

Oh, but Oklahoma is a Red state! Oklahoma won’t do all that crazy PC stuff! Dream on. Oklahoma public schools are run by the same teacher unions who rule the schools in darkest Massachusetts.

Well, this will certainly prepare students for college, as college is today. Arise, dunderheads! Don’t wait for God’s salvation! We know how to change the most fundamental aspects of human nature! All it takes is the right amount of coercion. You can get people to do just about anything if you put the right kind of scare into them.