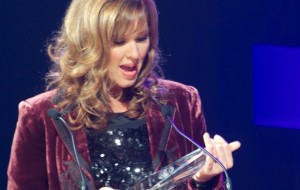 SAN DIEGO, Calif., – Christian Artist/Speaker MARY JAMES won the Female Vocalist of The Year award for the third time last Thursday night at the 20th Annual ICM Faith, Family and Country Awards in Nashville, TN. Her previous wins were in 2013 and 2010. In her opening comments she shared, “This belongs to Jesus, He is the One who deserves the awards,” Just before the category was announced, James joined Tommy Brandt, 2014 Music Evangelist and 5 time Male Vocalist of the Year winner, to sing “Amazing Grace, My Chains are Gone,” a popular adaptation of the 1773 John Newton classic hymn.

James accepted the Female Vocalist honor from members of the well-known trio Point of Grace, Shelley Breen and Leigh Cappillino, and comedian Victoria Jackson (SNL). Among the winners, Country superstars Carrie Underwood and Alan Jackson received “Mainstream Female Vocalist” and “Male Vocalist of the Year” honors, The Roys brought home “Bluegrass Artist of the Year” and Dennis Agajanian and Kali Rose won in the “Vocal Duo” performance category. Performing on the show were American Idol’s Danny Gokey, John Berry, The Roys, Rhonda Vincent, Ray Stevens, Inside Edition’s Megan Alexander who hosted the show, along with many others.

The rise in national recognition for her music has found Mary amassing a growing audience that has pushed numerous singles and #1’s to the top of the well-recognized Nashville based Power Source charts. James has maintained her momentum and appeal to radio and its listeners with singles such as “Strong” featuring Jamie O’Neal, “Nothing Can” featuring 2014 ICM Bluegrass Artists of the Year The Roys, “She Sings,” “Come to the Well” and “I’m Not Willing,” all soaring to the top of various Inspirational Country charts since she entered the genre in 2005. Her latest single, “No Wound Too Deep” is now on the radio nationwide.

Mary is known by audiences both nationally and internationally for her heart of worship, thought provoking original music and compelling adoption story of God’s transformative grace. She was featured on the cover of “Power Source Magazine” in August 2013 and in the San Diego based magazine “Refreshed” in October 2014. Mary provides concerts, transparent, biblically-centered keynote messages and has led worship alongside influential leaders and Bible teachers such as Dr. David Jeremiah, Kay Arthur, Sheila Walsh, Greg Laurie, Ken Davis, Nancy Stafford, Bob Goff, Kirk Cameron, Dr. Charles Ware and more.