The unilateral US sanctions announced by Obama on July 16 blocking Russian weapons and energy companies access to US bank loans demonstrate Washington’s impotence. The rest of the world, including America’s two largest business organizations, turned their backs on Obama. The US Chamber of Commerce and the National Association of Manufacturers placed ads in the New York Times, Wall Street Journal, and Washington Post protesting US sanctions. NAM said that the manufacturer’s association is “disappointed that the US is extending sanctions in increasingly unilateral ways that will undermine US commercial engagement.” Bloomberg reported that “meeting in Brussels, leaders of the European Union refused to match the US measures.” 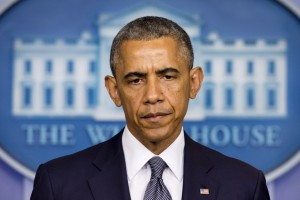 In attempting to isolate Russia, the White House Fool has isolated Washington.

The three traits that define Washington–arrogance, hubris, and corruption–make Washington a slow learner. Arrogant people wallowing in hubris are incapable of learning. When they encounter resistance they respond with bribes, threats, and coercion. Diplomacy requires learning ability, but Washington left diplomacy years ago and relies on force.

Consequently, with its sanctions Washington is undermining its own power and influence. Sanctions are encouraging countries to withdraw from the dollar payments system that is the foundation of US power. Christian Noyer, Governor of the Bank of France and a member of the European Central Bank’s Governing Council, said that Washington’s sanctions are driving companies and countries out of the dollar payments system. The huge sum extorted from the French bank, BNP Paribas, for doing business with countries disapproved by Washington makes clear the increased legal risks that arise from using the dollar when Washington makes the rules.

Washington’s attack on the French bank was the occasion for many to remember the numerous past sanctions and to contemplate future sanctions, such as those that loom for Germany’s Commerzbank. A movement to diversify the currencies used in international trade is inevitable. Noyer pointed out that trade between Europe and China does not need to use the dollar and can be fully paid in Euros or Renminbi.

The phenomenon of US rules expanding to all US dollar-denominated transactions around the world is accelerating the movement away from the dollar payment system. Some countries have already arranged bilateral agreements with trading partners to make their trade payments in their own currencies. The BRICS are establishing new payment methods independently of the dollar and are setting up their own International Monetary Fund to finance trade imbalances.

The US dollar’s exchange value depends on its role in the international payments system. As this role shrivels, so will demand for dollars and the dollar’s exchange value. Inflation will enter the US economy via import prices, and already hard-pressed Americans will experience more compression of their living standards.

The NSA spy scandal and Washington’s refusal to apologize and desist has deepened the distrust of Washington by its own allies. World polls show that other countries regard the US as the greatest threat to peace. The American people themselves have no confidence in their government. Polls show that a large majority of Americans believe that politicians, the presstitute media, and private interest groups such as Wall Street and the military/security complex rig the system to serve themselves at the expense of the American people.

Washington’s empire is beginning to crack, a circumstances that will bring desperate action from Washington. Today (July 17) I heard a BBC news report on National Public Radio about a Malaysian airliner being shot down in Ukraine. The reporting might have been honest, but it sounded like a frame-up of Russia and the Ukrainian “separatists.” As the BBC solicited more biased opinions, the broadcast ended with a report from social media that separatists had brought down the airliner with a Russian weapon system.

No one on the program wondered what the separatists had to gain by shooting down an airliner. Instead, the discussion was whether once Russian responsibility was established, would this force the EU to endorse tougher US sanctions against Russia. The BBC was following Washington’s script and heading the story where Washington wanted it to go.

The appearance of a Washington operation is present. All the warmongers were ready on cue. US Vice President Joe Biden declared that the airliner was “blown out of the sky.” It was “not an accident.” Why would a person without an agenda be so declarative prior to having any information? Clearly, Biden was not implying that it was Kiev that blew the airliner out of the sky. Biden was at work in advance of the evidence blaming Russia. Indeed, the way Washington operates, it will pile on blame until it needs no evidence.

Senator John McCain jumped on the supposition that there were US citizens aboard to call for punitive actions against Russia before the passenger list and the cause of the airliner’s fate are known.

The “investigation” is being conducted by Washington’s puppet regime in Kiev. I think we already know what the conclusion will be.

The probability is high that we are going to have more fabricated evidence, such as the fabricated evidence presented by US Secretary of State Colin Powell to the UN “proving” the existence of the non-existent Iraqi “weapons of mass destruction.” Washington has succeeded with so many lies, deceptions and crimes that it believes that it can always succeed again. 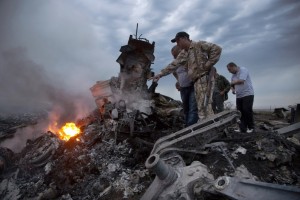 At this time as I write, we have no reliable information about the airliner, but the Roman question always pertains: “Who benefits?” There is no conceivable motive for separatists to shoot down an airliner, but Washington did have a motive–to frame-up Russia–and possibly a second motive. Among the reports or rumors there is one that says Putin’s presidential plane flew a similar route to that of the Malaysian airliner within 37 minutes of one another. This report has led to speculation that Washington decided to rid itself of Putin and mistook the Malaysian airliner for Putin’s jet. RT reports that the two airplanes are similar in appearance. http://rt.com/news/173672-malaysia-plane-crash-putin/

During the entire BBC frame-up of Russia, no one mentioned the Iranian passenger airliner that the US “blew out of the sky.” No one put sanctions on Washington.

Whatever the outcome of the Malaysian airliner incident, it demonstrates a danger in Putin’s soft policy toward Washington’s ongoing hard intervention in Ukraine. Putin’s decision to respond with diplomacy instead of with military means to Washington’s provocations in Ukraine gave Putin a winning hand, as evidenced by the opposition to Obama’s sanctions by the EU and US business interests. However, by not bringing a quick forceable end to the Washington-sponsored conflict in Ukraine, Putin has left the door open for the devious machinations in which Washington specializes.

If Putin had accepted the requests of the former Russian territories in eastern and southern Ukraine to rejoin Mother Russia, the Ukrainian imbroglio would have come to an end months ago, and Russia would not be running risks of being framed-up.

Putin did not get the full benefit of refusing to send troops into the former Russian territories, because Washington’s official position is that Russian troops are operating in Ukraine. When facts do not support Washington’s agenda, Washington disposes of the facts. The US media blames Putin as the perpetrator of violence in Ukraine. It is Washington’s accusation, not any known facts, that is the basis for the sanctions.

As there is no act too dastardly for Washington to undertake, Putin and Russia could become victims of a devious machination.

Russia seems hypnotized by the West and motivated to be included as a part of the West. This desire for acceptance plays into Washington’s hands. Russia does not need the West, but Europe needs Russia. One option for Russia is to tend to Russian interests and wait for Europe to come courting.

The Russian government should not forget that Washington’s attitude toward Russia is formed by the Wolfowitz Doctrine which states:

“Our first objective is to prevent the re-emergence of a new rival, either on the territory of the former Soviet Union or elsewhere, that poses a threat on the order of that posed formerly by the Soviet Union. This is a dominant consideration underlying the new regional defense strategy and requires that we endeavor to prevent any hostile power from dominating a region whose resources would, under consolidated control, be sufficient to generate global power.”