A re-established and self-declared Israeli Sanhedrin is calling US President Barack Obama to trial for what it says are “criminal offenses” against the Jewish people following the passage of the Iran nuclear deal.

The modern day Jewish high court, made up of 71 Judaic scholars and rabbis, plan to bring the American president to trial on Mount Zion on September 9, 2015, four days before Rosh Hashana, the beginning of heavenly judgement days for the Jewish nation.

According to a letter obtained exclusively by Breaking Israel News that was sent to the president, the Sanhedrin calls out Obama for “deliberately promoting genocide for the Jewish people.” The judges of the Sanhedrin call on the president to “immediately announce that you are repealing and suspending the agreement.” 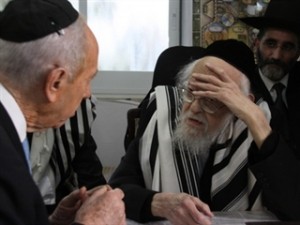 The Sanhedrin, which has been active in Israel for over a decade, recently made news when it announced that it would be putting Pope Francis on trial in absentia for his recognition of a “State of Palestine”.

“We are here for matters great and small, those that pertain to Israel, and those that pertain to other nations as well,” said Rabbi Dov Stein, secretary of the Sanhedrin, to Breaking Israel News. “It is part of the process of Geula (redemption) and of the Nation of Israel coming back to the Land of Israel, reestablishing the Sanhedrin and restoring the nation as it once was, ‘For out of Zion shall the Torah go out, and the word of God from Jerusalem.’”

The original Hebrew letter, with its English translation, sent to the US leader by the Sanhedrin can be read at breakingisraelnews.com.