“Thus saith Koresh king of Paras: All the kingdoms of the earth hath Hashem, the God of heaven, given me; and He hath charged me to build Him a house in Yerushalayim, which is in Yehuda.” Ezra 1:2

(Breaking Israel News) – The nascent Sanhedrin has turned a dispute between the Israeli Prime Minister and the Iranian Foreign Minister into an opportunity to invite Israel’s greatest enemy to help build the Third Temple. This offer is not nearly as preposterous as some may think, and has an undeniable precedent the Iranian Minister is quite proud to admit.

The international spat began on Purim, two weeks ago, when Israeli Prime Minister Benjamin Netanyahu attended a reading of the Megillah (Book of Esther) at a synagogue near his home in Caesarea. While discussing the Biblical story with children in attendance, he assured them, “Today, too, they’re trying [to kill us] in Persia, and today they’re also not going to succeed!”

Iran’s Foreign Minister Javad Zarif heard of Netanyahu’s comments and took umbrage at his country being portrayed as the villain. Zarif responded to the Israeli PM via Twitter, accusing him of “fake history and falsifying the Torah”. 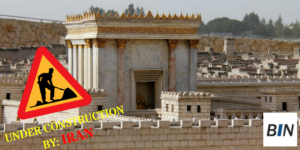 The Iranian minister then went on to claim that his country had saved the Jews three times throughout history. Zarif gave a distorted version of the Book of Esther, claiming that the hero was the Persian King Ahashverosh, and not the Jews, Esther and Mordechai. Zarif also reminded Netanyahu that it was Cyrus, a Persian king, who had facilitated the Jews’ building of the Second Temple.

The nascent Sanhedrin choose to see this exchange as an opening and an affirmation of Iranian national pride in helping the Jews build the Temple. The rabbinical court sent a letter to Zarif inviting him to manifest this historic Persian mission.

“We were overjoyed to hear of your reference to the wonderful and unique chapter in our nation’s history, in which the Cyrus, as king of the Persian Empire, gave his permission for the building of the Jewish Temple in Jerusalem,” the letter read.

“It is also recognized that he aided the project by returning the holy vessels that were taken from Solomon’s Temple by the Babylonian King Nebuchadnezzar.

“It is to be understood from your statements that you support the actions of King Cyrus and that your country supports the establishment of a Temple on Mount Moriah even today. We invite you to opening a dialog regarding this. We will be happy to hear your response to this invitation.”

Rabbi Hillel Weiss, spokesman for the Sanhedrin, said they were optimistic that relations between Israel and Iran could change drastically for the better.

“We respect the foreign minister and his sincere intentions he expressed in regards to the Temple,” Rabbi Weiss told Breaking Israel News. “The dialogue here should be one based on religion and mutual respect, and not exclusively based on political interest. As he said, we have historically cooperated in this endeavor and if it is indeed as important to the Iranians as it was to their predecessors, there is no reason why we can’t cooperate in building the Third Temple.”

Despite the Sanhedrin’s sincere goodwill, it is unlikely that Iran will accept Israeli overtures. For either side to do so would be a reversal of two decades of hostility. Though ancient Persia was friendly towards its sizable Jewish population, modern Iran can hardly be seen as a friend to Israel.

In the early days of the new Jewish State, Iran was the second Muslim-majority country to recognize its sovereignty, but relations turned bitter after the Iranian revolution in 1979, when Iran severed all diplomatic ties with Israel. This process has culminated in open hostility, typified by the words “Israel must be wiped off the Earth” printed on an Iranian missile used in a test in March 2016.

If the Sanhedrin’s offer of friendship bears fruit, it would truly be the type of miracle expected to usher in the Third Temple.