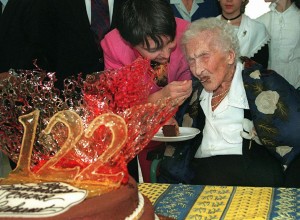 New research shows truth of what God told us in Genesis

(WNS)–Scientists are just beginning to believe what the Bible tells us in Genesis 6:3. “Then the Lord said, ‘My Spirit shall not abide in man forever, for he is flesh: his days shall be 120 years.’” With that, God declared there would be no more Methuselahs, and new research published in the journal Nature is bearing that out.

Researchers from the Albert Einstein College of Medicine have concluded the maximum human life span has a ceiling of about 115 years—and we’ve already reached it.

The researchers analyzed data from the International Database on Longevity and the Human Mortality Database, which compiles mortality and population statistics from more than 40 countries. Since the 19th century, average life expectancy has continued to rise. Those born in America in 1900 could only expect to live a short 47 years. Today that figure has risen to nearly 79 years. Since the 1970s, the age to which the oldest people live also has risen.

Demographers and biologists traditionally believed the increase in maximum life span would not end soon.

“But our data strongly suggest that it has already been attained and that this happened in the 1990s,” Jan Vijg, senior author of the new research, said in a statement.

According to the study, the percentage of people who survive to old age, defined as 70 and older, increases with their calendar year of birth, suggesting a continuing increase in average life expectancy. But when the researchers analyzed data from 1900 on, they found the life span of people who live beyond one century peaks at about 100 and then declines rapidly no matter the year of birth. In other words, for people who managed to collect 100 candles on their birthday cakes, the average life expectancy peaked right around that birthday, whether they were born in 1800 or 1900.

Next the researchers analyzed data for people who have lived to be 110 or older in the four countries with the largest number of people who have attained that age—the United States, France, Japan, and the United Kingdom. Between 1968 and 2006, the average age at death for these people increased rapidly between the 1970s and early 1990s but plateaued around 1995, further evidence of a lifespan limit. The researchers also calculated the chance of any one person anywhere in the world living to age 125 is less than 1 in 10,000.

To date, the oldest living person in modern recorded history, other than in early Biblical accounts, was Jeanne Calment, a 122-year-old French woman who died in 1997. The oldest man was Jiroemon Kimura of Japan, who died in 2013 at the age of 116.

Although medical advances against infectious and chronic diseases may continue to boost average life expectancy, the researchers do not believe the maximum life span will increase.

“Such advances would need to overwhelm the many genetic variants that appear to collectively determine the human life span,” Vijg said.