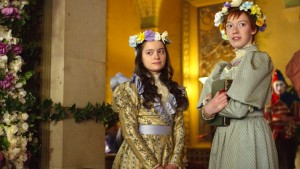 The Netflix Original series ANNE WITH AN E follows the beloved orphan character Anne, from Lucy Maude Montgomery’s novel, Anne of Green Gables. The second season of the show was released in early July 2018, and one episode has many viewers ditching the show because of surprising LGBT content in what should be a fairly broad audience TV series.

The surprising LGBT content came in the shows revelation that the cherished character Great Aunt Josephine Barry is a lesbian. The Creator of the show Moira Walley-Becket spoked to IndieWire in an interview and stated, “Upon reading [the novel] again as an adult, I was wondering about Aunt Jo. In the book, she’s a spinster and she’s just a bit of a curmudgeon, and that’s kind of it. So, I’m like, ‘Well, she coming to the Barrys’ for a month and she’s grieving,’ that’s why I decided to justify why she’s there: Who is she grieving?”

In the show, Aunt Josephine’s sadness comes about due to the loss of her unspoken “romantic” partner Gertrude. A change of character that has less to do with staying true to the period and more to do with being politically correct.

Walley-Beckett continues, “Although the term didn’t exist at the time, their relationship was a “Boston marriage,” the cohabitation of two women independent of financial support from a man. While the Barrys merely saw this as a friendship, Josephine and Gertrude were in truth a lesbian couple.”

The creators of the series have carefully manipulated the classic story with an agenda that fits their worldview. They do so by twisting Aunt Josephine’s annual gathering in the episode titled Memory Has as Many Moods as The Temper. As IndieWire reports; “One of the roles many feminist “new women” like Aunt Josephine performed in that era was to promote social and cultural causes. For Aunt Jo, that aforementioned forum of acceptance took shape in the so-called queer soirée, a fabulous fete that Josephine and Gertrude held annually.”

In the “queer soirée”, many other characters from the series draw upon counterparts from the past, such gay icons and individuals struggling with their identity. The goal is to make modern audiences understand the trials of living with these counter-cultural worldviews in an environment where they were seen as taboo.

Many current TV series such as THE FOSTERS, TRANSPARENT and ORANGE IS THE NEW BLACK have pushed the homosexuality envelope on TV. ANNE WITH AN E’s attempt to also push LGBT in programming that would normally attract more faith-based audiences is utterly unnecessary. Moreover, focusing attention on the sexuality subplot of the series detracts from the moral redemptive nature of the story. Obviously, the minds behind the series are jumping onto the ideological bandwagon that already has concerned parents even more worried.

The creators and writers behind ANNE WITH AN E want to influence young audiences to believe that homosexuality is an acceptable path for anyone who might be “questioning”. The discussion of gender and sexuality are in fact discussed ad nauseam. People in 2018 don’t need or want to see political/social debates take place on “family” TV shows, they see enough of it on social media or see it on the 5 ‘o clock news. Rather, we should be turning to the ultimate resource for clarification on these pressing topics: the Bible.

Audiences are not powerless. Altering the context of these classic characters in order to adhere to some person’s views of acceptability is totally unacceptable. This is a crucial time for believers to pray over the Entertainment Industry and maintain a healthy awareness of the evils that pollute popular culture. Why not start now?

Like Paul says, discernment will be the key to staying above reproach; “I urge you, brothers and sisters, to watch out for those who cause divisions and put obstacles in your way that are contrary to the teaching you have learned. Keep away from them. For such people are not serving our Lord Christ, but their own appetites. By smooth talk and flattery, they deceive the minds of naive people.” (Romans 16:17-18)

With this in mind, audiences need to recognize the power of their part in the industry. We can say no to entertainment choices, and we can pray that the individuals that make up the industry would be shaped by God’s Word, which has the power to transform and renew everyone.