‘Steady flow of damaging information’ made him ‘least-popular’ prez-elect

In a confidential memo outlining a plan by progressive, George Soros-funded groups to remove President Trump from office, one member of the coalition boasted of laying the “groundwork” by “driving” 673 anti-Trump media stories.

The stories fed to the media by the group American Bridge throughout the 2016 campaign, the 49-page memo said, exposed “Trump’s unstable temperament, scam-filled business record, history of sexual abuse and misogyny, and racist behavior.”

“The groundwork we laid will be critical to delegitimizing Trump as president,” the group declared. Another member of the coalition, touting itself as a liberal answer to Judicial Watch, Citizens for Responsibility and Ethics in Washington, or CREW, targeted Trump through “litigation, legal complaints, research and press outreach.” 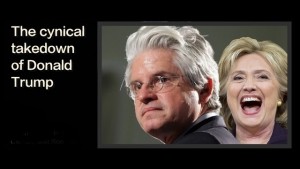 “Trump will be afflicted by a steady flow of damaging information, new revelations, and an inability to avoid conflict issues,” CREW declared.

American Bridge, describing itself as the “epicenter of opposition research and rapid response in presidential and Senate elections,” said it “[d]rove coverage that led to Trump entering office as the least popular president-elect in modern history.”

American Bridge, Brock said, has a “state-of-the-art Trump War Room” that it uses, to among other things, vet Trump judicial nominees and “uncover details of Trump’s affection for Russia and Putin.”