The civil rights movement has of course been chronicled extensively in books, documentaries and television films, but surprisingly few feature films have plumbed this rich history. The battle for equality spearheaded by Dr. Martin Luther King Jr. has been touched on indirectly in such films as The Long Walk Home, Mississippi Burning, and Lee Daniels’ The Butler. Now Ava DuVernay‘s Selma, as the title suggests, tackles the subject head-on — and, more importantly, does it justice. The film received its world premiere at AFI Fest, and although a few scenes were still receiving technical polish and the end titles were not complete, the audience gave the picture a rapturous ovation. 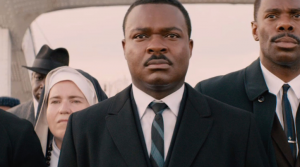 DuVernay’s earlier films such as Middle of Nowhere have been intimate dramas. So this epic tale with a large cast of characters and violent confrontation scenes represents a departure for the director. Yet the strength of the film is the sense of proportion that DuVernay demonstrates. In a season of so many bloated, overlong films, this two-hour recounting of a few crucial months in 1965 seems just the right length. Intelligently written, vividly shot, tightly edited and sharply acted, the film represents a rare example of craftsmanship working to produce a deeply moving piece of history.

The film, written by Paul Webb, makes an intriguing companion piece to Robert Schenkkan‘s Tony-winning play All the Way, which showed how Lyndon Johnson manipulated members of Congress to pass the Civil Rights Act of 1964. Johnson also figures prominently in Selma, as King urges the reluctant president to get behind voting rights legislation, a campaign that ended with Johnson introducing the Voting Rights Act of 1965.

The film gets off to a slightly shaky start. It opens with King receiving the Nobel Prize in Stockholm, then cuts to the bombing of the church in Birmingham that killed four black girls. That juxtaposition seems a bit forced and on-the-nose. The film surprisingly find its tone in a short scene that follows, in which a Selma resident attempts to register to vote and is turned away. The surprise is that the character is played by superstar Oprah Winfrey (one of the film’s producers), who does not call attention to herself but blends convincingly into the period and seems representative of the ordinary black citizen who gained a voice partly as a result of Dr. King’s crusade to extend freedom to all Americans.

DuVernay’s experience making much smaller domestic films shows in her attention to all the faces in the backgrounds of scenes and to all the actors who have only a few minutes onscreen and yet register vividly. Nigel Thatch offers a remarkable impersonation of Malcolm X in one brief but telling scene with Coretta Scott King (Carmen Ejogo) in which he suggests that his public conflicts with King may have actually been part of an effective good cop/bad cop strategy that worked to the movement’s benefit. In another fine cameo, Henry G. Sanders is heartbreaking as the 82-year-old father of a man murdered in Selma.

It’s no accident that the film is called Selma rather than King. DuVernay and Webb want to provide a tapestry of a movement rather than a hagiography of one great leader. The film gives time to all the people who worked alongside Dr. King, sometimes arguing and at other times supporting him as they struggled to refine their strategy. Those who think they know the story will have their memories jogged by bits of less familiar history, like King’s initial decision to turn back from the march to Montgomery.

DuVernay brings these backroom negotiations to life, but she also demonstrates an unexpected flair for widescreen spectacle. The initial march across the Edmund Pettus Bridge in Selma, which led to a savage attack on the marchers by troopers on horseback, is a breathtaking sequence. Cinematographer Bradford Young and editor Spencer Averick make major contributions throughout the film. 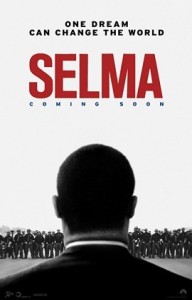 The cast also shines. Although there is a long tradition of British actors playing Southerners, going back to Vivien Leigh as Scarlett O’Hara, it does seem a bit strange that three of the key roles here are played by Brits. As LBJ, Tom Wilkinson sometimes veers a little too close to caricature, but he rouses himself for his final speech to Congress, which is heartfelt and affecting. Tim Roth as George Wallace captures the shrewdness as well as the viciousness of the racist governor.

In her comments after the AFI screening, DuVernay generously acknowledged British-born actor David Oyelowo as the film’s prime mover. He dreamed of playing King for years and enlisted her to direct. Although Oyelowo doesn’t look or sound exactly like King, he gives a definitive performance. His rousing speeches are superbly done, and his moments of introspection and self-doubt retrieve the humanity in a leader who has come to seem larger than life. This year’s race for best actor, which is already packed with strong contenders, may just have a new front-runner. And DuVernay may also make history by becoming the first African-American woman nominated as best director. This stirring yet always level-headed piece of history does what all the best films accomplish: It opens hearts and minds.

Selma is set for release on Christmas Day with plans to expand its theater count on Jan. 9. A trailer is available at www.selmamovie.com