For example, if the government determines that pharmaceutical companies are greedy and should pay higher taxes, this legislation only redistributes the greed money to policy makers, pushing the companies to operate more greedily to keep up with the demand. The companies then find out it is easier to infiltrate the government with their influence so they can steer policies that help them monopolize.

The American medical system is in financial shambles. The costs continue to go up even after the Affordable Care Act intervened to redistribute costs. President Obama promised lower healthcare costs after passing the Affordable Care Act, but the law only mandates more health insurance payment plans that don’t fix the fundamental problems within the medical system. The mandated health insurance plans only legitimize an industry that encourages financial waste, over-medication and over-diagnosis. 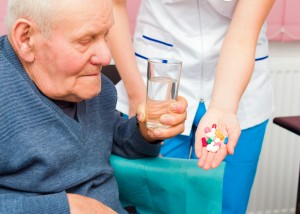 The facts make it clear that the promises of the Affordable Care Act are backfiring. A new report from Bloomberg shows that senior healthcare costs are skyrocketing, years after the law was passed. The average 65-year-old couple preparing to retire in 2015 is looking at healthcare costs of $245,000 per year, and this number is projected to climb. This average, which has jumped 11 percent from 2014, shows how domineering and enslaving the medical system has become. Government intervention through the years, which has legitimized the faults in the medical system, has only driven up costs.

A shift in focus must occur for healthcare costs to drop for everyone in the United States. The individual must be put in charge of his or her healthcare and the incentives must reward preventive lifestyle measures, not lazy doctor visits that bill health insurance plans for quick-fix pharmaceuticals that cause more problems down the road.

Prescription drugs are now costing seniors an average of $56,350 per year

Broken down per category, the costs of prescription drugs make up 23 percent of the $245,000 figure, which means they cost the average senior $56,350 per year. This ridiculous cost to manage disease comes after seniors have been gutted through the “health insurance” industries. The amount of money spent per senior on deductibles and cost-sharing with an insurer is 43 percent of the $245,000 total, which equates to a whopping $105,350 per year. The other 34 percent of the total goes to fund the Medicare Part B and D premiums.

The saddest part about these costs and this system is that there is no focus on actual health. It is all a giant disease management system that pushes pharmacology before nutrition. The costs are also climbing because of life expectancy calculations. Fidelity Investments raised life expediencies to determine the cost of healthcare for 2015. A 65-year-old man is now projected to live until age 85, up from 82 a year before. A 65-year-old woman is expected to reach age 87, up from age 85 in 2014.

People are expected to live longer in terms of years, but people across the board are losing their quality of life in the process. This is mainly because of the fundamental problems that exist in the medical system.

What if the healthcare system emphasized the importance of clean water and encouraged patients to drink adequate amounts of water that is filtered and free of heavy metals, fluoride, pesticides, and other toxins?

What if doctor visits held patients accountable for getting daily Vitamin D from the sun to support immune system health? What if organic whole food vitamins were prescribed in place of synthetic quick-fix pills?

What if the healthcare system educated people on the environmental toxins in the home, including pesticides, artificial petroleum-derived fragrances, bisphenols and microwavable plastics that leech hormone-disrupting chemicals into the body?

What if hospitals led by example by tending to large organic gardens that prove exactly where health really comes from?

There are a million ways the healthcare system can change to reward healthy lifestyle decisions. Why is the government legitimizing the very problems within the broken American healthcare system? Is it all deliberate or out of ignorance?