Carrying a grudge is exhausting. ~ Cheese that doesn’t belong to you is nacho cheese. ~ Children may be deductible, but they are still taxing. ~ Courtship: Chartered cruise boat for a group of judges. ~ Dear Algebra, Please stop asking us to find your X. ~ Do not believe in miracles…rely on them. ~ Dogs welcome. People tolerated.

~ Don’t borrow trouble. Be patient and you’ll soon have some of your own. ~ Every new morning brings us as much of God’s grace as we need for the day. ~ Fool-proof tip for self-improvement: Just follow all the advice you give everybody else. ~ For every action, there is an equal and opposite malfunction. ~ Good teachers are those who can challenge young minds without losing their own. ~ Government regulation is a lot like ketchup – you either get none or more than you want.

How To Call the Police When You’re Old, And Don’t Move Fast Anymore

George Phillips, an elderly man from Walled Lake, Michigan, was going up to bed, when his wife told him that he’d left the light on in the garden shed, which she could see from the bedroom window.  George opened the back door to go turn off the light, but saw that there were people in the shed stealing things. He phoned the police, who asked  “Is someone in your house?” He said “No,” but some people are breaking into my garden shed and stealing from me. Then the police dispatcher said “All patrols are busy, you should lock your doors and an officer will be along when one is available” George said, “Okay.”  He hung up the phone and counted to 30. Then he phoned the police again. “Hello, I just called you a few seconds ago because there were people stealing things from my shed. Well, you don’t have to worry about them now because I just shot and killed them both; the dogs are eating them right now.” and he hung up.  Within five minutes, six Police Cars, a SWAT Team, a Helicopter, two Fire Trucks, a Paramedic and an Ambulance showed up at the Phillips’ residence, and caught the burglars red-handed.  One of the Policemen said to George, “I thought you said that you’d shot them!” George said, “I thought you said there was nobody available!”

Be Careful for What You Wish!

A married couple in their early 60s are celebrating their 40th wedding anniversary in a quiet, romantic little restaurant. Suddenly, a tiny yet beautiful fairy appeared on their table. She said, “For being such an exemplary married couple and for being loving to each other for all this time, I will grant you each a wish.” The wife answered, “Oh, I want to travel around the world with my darling husband.” The fairy waved her magic wand and – poof! – two tickets for the Queen Mary II appeared in her hands. The husband thought for a moment: “Well, this is all very romantic, but an opportunity like this will never come again. I’m sorry my love, but my wish is to have a wife 30 years younger than me.” The wife, and the fairy, were deeply disappointed, but a wish is a wish! So the fairy waved her magic wand and POOF! The husband became 92 years old.

Heaven: Closer Than You Think

Pleasant words are as an honeycomb

Bob is a favorite conductor among commuters on the train. He has great rapport with the regulars, but occasionally runs into a problem rider. One passenger, for instance, seemed irritated at having to hand over his ticket to be punched. “Where are you going today?” Bob asked, smiling. “Well, what does the ticket say?” replied the traveler sarcastically. “Um, it says you’re on the wrong train,” Bob informed him. “What am I supposed to do now?” asked the flustered passenger. Returning the punched card, Bob replied calmly, “Ask the ticket.”

An elderly husband and wife went to the doctor’s office for the husband’s appointment. He was hard of hearing. The doctor said he needed a urine and stool sample. The man turned to his wife and asked what he said. She replied to her husband, “He needs a pair of your dirty underwear.”

Two airheads are nailing siding onto a house. Airhead 1: “Y’ know, when I pull nails out of the bag, half of them are pointing in the wrong direction.” Airhead 2: “Of course, dummy!  Those are the nails for the other side of the house.” 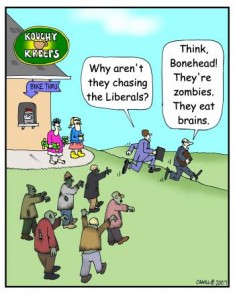 The real measure of your wealth is how much you would be worth if you lost all your money.

~ I can’t wait until I’m old enough to pretend I can’t hear. ~ I really didn’t mean to push all your buttons. I was just looking for mute. ~ I’m not old. I woke up, I lifted my arms, I moved my knees, I turned my neck. Everything made the same noise: Crrrrrraaaaaaccccckkkk! So I’ve come to the conclusion that I’m not old, I’m crispy! ~ If you teach children that they descend from monkeys, you shouldn’t be surprised when they behave like them. ~ Gods faithfulness always surpasses our unfaithfulness. ~ My decision-making skills closely resemble that of a squirrel when crossing the street. ~ Optimist: a person who figures that taking a step backward after taking a step forward is not a disaster…it’s more like the cha-cha. ~ Blessed are they who have nothing to say and who cannot be persuaded to say it. ~ I always say “No” to temptation — but it doesn’t always listen. ~ Often when we lose hope and think this is the end, GOD smiles from above and says, “Relax, it’s just a bend, not the end!”