A spirit of darkness has spread through the halls of a Maryland elementary school, as seven students cut their wrists with blades, and another attempted to hang herself in the bathroom.

However, instead of addressing the seriousness of the crisis, school officials delayed. In fact, you won’t believe how officials responded when they found out what happened. The truth is – they didn’t respond, at least not as they should have. And now, parents are speaking out demanding answers as to why they were left in the dark, as to what is really happening in the elementary school. 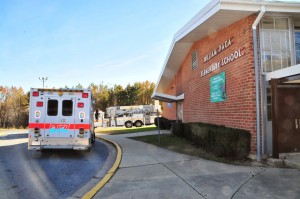 The seven elementary students cut their wrists with blades inside a pencil sharpener. But instead of notifying parents as soon as the incident happened, the school waited and refused to provide details. To add further tragedy to the mix, the day before the seven students cut their wrists, one 4th grader felt so attacked at school, she tried to hang herself with an apron in the bathroom.

Fox News reported: “Officials did not reveal details on why the students had intentionally cut themselves, but parents of a fourth grader told FOX5 their daughter had attempted suicide in the same elementary school the day before the cutting incident. The parents said their daughter, who was repeatedly bullied at the school, attempted to hang herself with an apron in the school’s bathroom.

“I thought it was more than an incident. When a child is trying to take their life because other students are picking on them, I think that is an emergency,” William Vannall, the girl’s father, told FOX5. “I think some paramedics should have been there to make sure she didn’t mess her neck up or anything like that. I just thought more should have been done.”

Vannall said the school mishandled his daughter’s attempted suicide and officials should have informed parents about the bullying. “The minute they came back from spring break, a letter should have been typed up and letting all parents know that bullying won’t be tolerated,” he said. “We just had a child almost kill themselves in a bathroom and nothing was sent out.”

It appears this school has a pattern of neglecting care in a crisis. After the children cut their wrists, they were seen by a school nurse, 911 was not called, and the children were not taken to the hospital. Clearly the students were having a mental issue that should have been addressed. The school should have notified the parents right away, but they didn’t. Instead, parents were left in the dark.

Seven students cutting their wrists with blades, is not an incident, it’s a critical and serious event. It’s apparent a mental health crisis is taking place at this school, if elementary schoolers are attempting to commit suicide.

Teachers need to work with school counselors and bring in outside support to determine what is taking place in the halls. And parents need to be kept in the loop on what is happening.