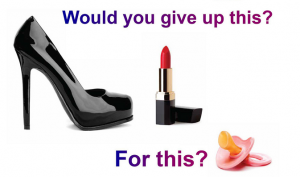 The latest pro-abort ad attempts to paint the picture that having a baby is the ultimate act that will ruin a woman’s life.

In a desperate attempt to encourage women to get abortions, an unthinkable ad was released attempting to terrify women from keeping their baby. Even worse – the ad paints a false contrast of what getting pregnant actually means, and you won’t believe the latest lie being pushed upon young women.

The latest ad hopes to push the emergency contraception pill onto women which can cause an abortion when taken.

This pill is designed to encourage women to be promiscuous and be sexually active without the “consequence” of having a baby. But not only is the ad encouraging women to have abortions, you won’t believe the way they’ve marketed this pill.

In a desperate attempt to further target young women, the ad shows high heels and lipstick in contrast with a pacifier, basically telling women they need to choose which path they want to take.

Life News reported: “A project of the Walsall Healthcare NHS Trust, the ad asks “Would you give up this?” alongside pictures of a high heeled women’s shoe and a tube of lipstick, followed by “For this?” and a picture of a baby pacifier.

“In other words, are you ready to give up your fun, social and lipstick-wearing life to look after a baby? Because, when you’re a mother, all those things will be firmly out of your reach.”

The blatant sexist ad is getting criticism from both sides of the political spectrum, as it reduces a woman’s worth to wearing lipstick and heels. As if women are reduced to their clothes and makeup. Activists who claim to be “pro-women” are somehow endorsing this ad as if it is a good thing.

The attempt to shame mothers for choosing to have a baby is equally disturbing. Not only is the ad offensive, it isn’t even true! As every mom knows, having a baby is just the beginning of a beautiful life. Sure there are hard days, complete with sweatpants and no makeup. But whether parenting in flip-flops or high heels, being a mother is a beautiful act, which should be celebrated.

Mothers need support. Pregnant young girls need to know they are not alone, and they have a network of women who want to walk alongside them.

The scare tactic campaign is pathetic. There are plenty of moms who are having babies and living vibrant lives.

And there are plenty of mamas who have multiple children – AND still, go out.

Rebecca Kiessling, President of ‘Save the 1’ a prominent pro-life organization, spoke out about the ad: “I am a mother of five, a soccer mom AND I’m an attorney and international pro-life speaker and activist, AND I have a lot of fun time with my girlfriends. I traveled the globe with all five of my children when they were babies,” Kiessling told LifeNews. “Don’t tell me I have to engage in child sacrifice in order to be a professional woman or to be able to have fun as a woman.”

So cheers to all the fellow moms out there! Raising their little ones, lipstick and all.