RIO DE JANEIRO (BP) — Jordan O’Donnell is in a hurry. The 21-year-old Virginia Tech senior weaves his way through the sea of raucous futebol (soccer) fans jamming Rio’s streets. But O’Donnell isn’t headed to the match of the day, Ecuador vs. France. Instead, he’s hustling against the crowd, bound for a nearby church to get Bibles for a group of teenage boys with whom he’s just shared the Gospel. 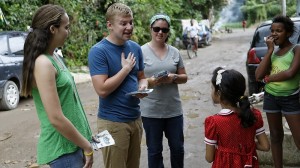 For O’Donnell and a team of 10 Southern Baptist college students, this is the last day of street evangelism near Rio’s Maracanã soccer stadium. It’s been a focal point for outreach as the students partnered with Brazilian Baptists and IMB missionaries to spread the Gospel during the FIFA World Cup, June 12-July 13. But after two weeks of sharing their faith nearly non-stop, it’s time for the students to head home.

That’s why O’Donnell doesn’t want to miss this last opportunity. He figures he’s got about five minutes before the teens get bored with waiting and leave, and with two of them expressing genuine interest in Christ, he’s practically sprinting to the church.

O’Donnell runs ahead of his two ministry partners, Bekah Gordon and Gloria Reese, who struggle to keep up with his rushed pace. Gordon is co-leading the student mission team and recently served as a North American Mission Board semester missionary at Auburn University at Montgomery (Alabama); Reese, 17, lives in Rio and is the daughter of IMB missionaries Eric and Ramona Reese.

Just minutes earlier, the three of them met the teens in front of their school a few blocks from the stadium. O’Donnell shared his testimony and asked the boys if they wanted to live for God. They looked uncertain. One admitted he wants to live for himself; another said he doesn’t know who God is.

As Reese translated between English and Portuguese, Gordon told the boys the easiest way to know God was by reading His Word. “If you’re looking for God, look in the Bible,” she explained, asking each of the four teens if they had access to a Bible. Two did not but said they’d like one. That sent O’Donnell running. 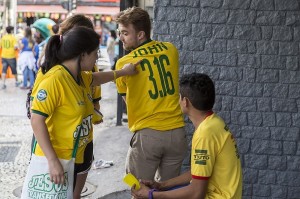 By the time Gordon and Reese reach the street where the church is located, O’Donnell is already making his way back with the Bibles. It’s been more than five minutes, and the trio hurries to where they left the teens. They’re relieved to see the boys are still waiting. O’Donnell puts the Portuguese Bibles into the teens’ hands. “Read this and ask questions,” he tells them. “It changed my life.”

The American students have had dozens of these kinds of conversations during their time in Rio. Overall, they estimate they’ve led more than 100 people to faith in Jesus Christ, simultaneously connecting new believers with local churches where they can be discipled. Many more have heard the Gospel, some for the first time.

It hasn’t been easy. Since the games began, police barricades have moved the students (and anyone else without World Cup tickets) farther and farther from the gates of Maracanã Stadium, making it harder to connect with fans. And, they aren’t the only faith group in town trying to engage people in conversation — Jehovah’s Witnesses man literature stands on street corners around the stadium.

But the students haven’t done it alone. They’re part of a massive evangelism effort spearheaded by Brazilian Baptists, who’ve enlisted more than 1,800 national volunteers to serve in World Cup-related ministries across the country. More than 300 are stationed in Rio alone.

At the heart of that effort is Igreja Batista Missionária do Maracanã (Maracanã Missionary Baptist Church), which sits about 250 yards from the Maracanã Stadium.

“This is a way of reaching the whole world, because here at Maracanã you have the whole world converging,” Alexandre Silva, the church’s pastor, says.