Side Effects: Death. Confessions of a Pharma-Insider

The 2nd Edition Of The International Best Seller That Exposed Big Pharma!

What would you do if you made hundreds of thousands of dollars each year, and stayed in the best hotels and ate in the best restaurants around the world . . . wining and dining clients at posh resort destinations with the full approval of your bosses . . . selling the products of major pharmaceutical companies?

Well, if you were John Virapen, Ph.D., you would write a tell-all book exposing the dirty, dark secrets of Big Pharma.

John spent nearly four decades plying his trade: helping to gain approval for infamous drugs like Prozac, sweet-talking doctors and their staff to accept his free samples of the latest concoction from his company, bribing opinion leaders and regulatory authority employees, all to get more drugs into the hands of patients, some drugs that came with deadly side effects. 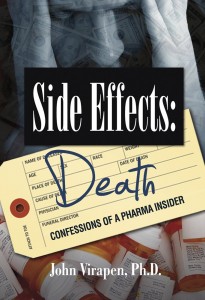 After the birth of his last child over 10 years ago, the hackles on the back of his neck were raised when he saw who Big Pharma was marketing to now: kids. John decided right there and then to get the message out to as many as possible, to warn them about the pills he had been pushing, to educate them about the deadly side effects he knew existed, but that Big Pharma knew how to hide from public view.

Thanks to John we can learn all their dirty tricks, for never has someone so close to the action and that privy to the ways of Big Pharma exposed it all in book form. Find out why John is known as the “Big Pharma Insider.”

“I bribed a Swedish professor to enhance the registration of Prozac in Sweden.” John writes in the book. Pharmaceutical companies want to keep people sick. They want to make others think that they are sick. And they do this for one reason: money.

“Side Effects: Death” is the true story of corruption, bribery and fraud written by Dr. John Virapen, who has been called THE Big Pharma Insider.

During his 35 years in the pharmaceutical industry internationally (most notably as general manager of Eli Lilly and Company in Sweden), Virapen was responsible for the marketing of several drugs, all of them with side effects. Now, Virapen is coming clean and telling all of the little secrets you were never intended to know!

For more information go to www.sideeffectsdeath.com