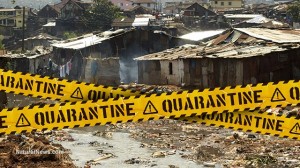 (NaturalNews) An unprecedented national lockdown is about to take place in Sierra Leone, one of the three West African countries most embattled by the worst Ebola outbreak in history. Reports indicate that Sierra Leone’s 6 million residents are being asked to stay home for three days this weekend while patrols rove the country in search of sick patients and decomposing bodies.

Beginning on Friday at midnight, the entire nation will be required to stay at home while some 30,000 volunteers go door-to-door looking for human fallout. The controversial initiative is meant to root out hidden sources of Ebola, as many families are trying to conceal their ailed loved ones by keeping them hidden from authorities.

“Rain or shine, the shutdown exercise is going to go ahead,” stated Steven Gaojia, head of Sierra Leone’s emergency operation center. “During the three days… the job is going to get done.”

The plan is to hit all 1.5 million households in the country, a lofty goal that many say will be impossible with just 7,000 volunteer teams of four. During the sweep, these teams will reportedly hand out bars of soap and information about how to avoid contracting and spreading Ebola. The government says these teams will not be entering people’s homes.

If patients or bodies are spotted, however, the teams are being instructed to contact emergency services or burial teams “if by chance the teams happen to bump into such situations.”

In the meantime, extra beds are being set up at various schools and hospitals throughout the country, including 200 in the area around Freetown, Sierra Leone’s capital and largest city. At the end of the three-day lockdown, the government expects an increase of between 15 and 20 percent more Ebola patients.

Besides the inspection teams, the government is also employing an additional 14 burial teams to be on call when bodies are discovered. Members of these fleets will be ready to collect samples from discovered bodies and immediately deliver them to laboratories for testing — and they will be doing this mostly by bicycle.

Containing 6 million people during this time will not be an easy task, which is why local community activists and civil society leaders have also been recruited to enforce the curfew. The only people who will be allowed to move about freely during the sweep are healthcare workers, emergency services, and various security forces.

Meanwhile, residents are being encouraged to be on the lookout for suspected cases of Ebola in their neighborhoods, which are to be reported to local authorities. Similar to the “see something, say something” anti-terrorism campaign in the U.S., the snitch program has been dubbed a “neighborhood watch”-style Ebola surveillance initiative.

But the spread of Ebola could potentially worsen from the lockdown, says former Doctors Without Borders director Jean-Herve Bradol. He told the Agence France-Presse (AFP) that confinement efforts will be extremely difficult to enforce, and that it is “highly unrealistic” that the goal of the effort will be achieved.

“The country doesn’t have the capacity to visit every household in just three days,” he is quoted as saying. “This leads to the concealment of potential cases and ends up spreading the disease further.”