The latest animated film from Illumination Entertainment, Sing shares the story on a down-on-his-luck theater-managing koala whose big dreams lead him to the bottom … before he finds his way to the top. Voiced by well-known actors like Matthew McConaughey, Reese Witherspoon, Taron Edgerton, Seth McFarlane, Scarlett Johansson, Nick Offerman, and John C. Reilly, the menagerie of animals present a story of music, showmanship, perseverance, and humor that will make you want to sing. 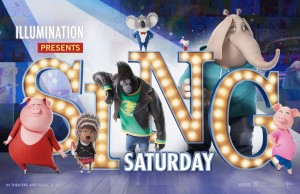 Buster Moon (McConaughey) grew up loving the theater, and in a mad convergence of desperation and clerical error, he and his aged iguana secretary Ms. Karen Crawley (Garth Jennings) end up launching a musical competition akin to Universal’s The Voice. While his friend Eddie Noodleman (John C. Reilly) warns him of the dangers of the competition, Moon excitedly draws in put upon housewife pig Rosita (Witherspoon), shy elephant Meena (Tori Kelly), streetwise mouse Mike (Seth McFarlane), punk-rocking porcupine Ash (Scarlett Johansson) and the gorilla son of a gangster, Johnny (Taron Edgerton). Together, they will form the heart of Sing, pushing toward the final show.

While Moon’s hoped-for show is built on a lie, or really, the accidental difference in a few decimal places, the tragic destruction of the Moon Theater sends him into a tailspin. But even though his alliance with the others was built on problematic choices, the way which his newfound friends respond to the tragedy shows him that there’s still hope. The truth is that each of the characters has his or her own set of hardships – an overworked home life, a mountain of debt, a lack of courage, a troubled family life – together they journey forward to Oz, having already realized that the Wizard can’t help them as much as they can help each other. 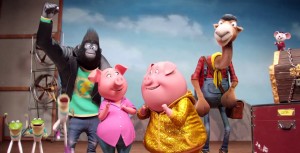 With close to one hundred songs that music fans and casual listeners will recognize from various eras, Sing closes out the final show with Meena’s delivery of “Faith,” an original song from Stevie Wonder and Ariana Grande. Having already caught the audience with Leonard Cohen’s “Hallelujah” (Kelly singing), Taylor Swift’s “Shake It Off” (Kroll & Witherspoon), and Sinatra’s “My Way” (McFarlane), the power of the film is completely aligned with its music. That powers it through trouble, and reminds the audience that singing (and community) will get them through the darkest of days, along with a little faith.

Each character learns to find their voice, and to sing boldly with their gift, regardless of what others may have previously said or done to their detriment. Each of them finds a way up, as Moon says regularly, “The best part of hitting rock bottom is that there’s only one way to go, and that’s up!” There are several lessons in there for kids and their families, wrapped in music and delivered with humor, heart, and an earful of catchy beats.