Villa made news at last year’s awards by showing up in a “Make America Great Again” dress. 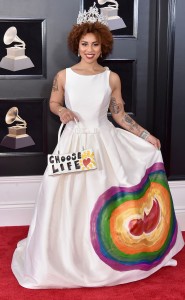 (New York, NY)- Joy Villa made her own pro-life statement in a big, bold way at the 60th Grammy Awards in New York City Sunday night.

The singer wore a white wedding dress on which she hand-painted an image of a fetus surrounded by a rainbow. She completed the ensemble with a purse also hand-painted with the words “Choose Life.” “I’m a pro-life woman. This year I chose to make a statement on the red carpet like I always do,” she told Fox News. “I’m all about life.”

Villa made news at last year’s awards by showing up in a “Make America Great Again Dress.” She said she was inspired to paint this year’s dress because she gave up a baby for adoption when she was 21. Villa said she supports adoption over abortion.

The 26-year-old singer said she was among the few of conservative celebrities in Hollywood, but that doesn’t stop her from expressing her point of view. “There is a lot of hypocrisy we see from celebrities,” she exclaimed.