SNL mocked my appearance. Here’s why I didn’t demand an apology. 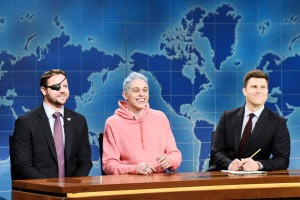 Dan Crenshaw, a former Navy SEAL, is a Republican representative-elect from Texas.

The past couple of weeks have been unusual for me, to say the least. After a year of hard campaigning for Congress in Texas and gradually entering the public sphere, I was hit by a sudden, blinding spotlight. But I have no complaints — it wasn’t as bad as some other challenges I’ve faced, like a sudden, blinding IED explosion. (See what I did there? “Saturday Night Live” has created a comedic monster.)

I agreed. But I also could not help but note that this was another chapter in a phenomenon that has taken complete control of the national discourse: outrage culture. It seems like every not-so-carefully-worded public misstep must be punished to the fullest extent, replete with soapbox lectures and demands for apologies. Anyone who doesn’t show the expected level of outrage will be labeled a coward or an apologist for bad behavior. I get the feeling that regular, hard-working, generally unoffended Americans sigh with exhaustion — daily.

Was I really outraged by SNL? Really offended? Or did I just think the comment about losing my eye was offensive? There is a difference, after all. I have been literally shot at before, and I wasn’t outraged. Why start now?

So I didn’t demand an apology and I didn’t call for anyone to be fired. That doesn’t mean the “war . . . or whatever” line was acceptable, but I didn’t have to fan the flames of outrage, either. When SNL reached out with an apology and an offer to be on the show, I wasn’t fully sold on the idea. It was going to be Veterans Day weekend, after all, and I had events with veterans planned. I asked if another weekend might work. No, they said, precisely because it was Veterans Day, it would be the right time to send the right message. They assured me that we could use the opportunity to send a message of unity, forgiveness and appreciation for veterans. And to make fun of Pete Davidson, of course.

And that’s what we did. I was happy with how it worked out. But now what? Does it suddenly mean that the left and right will get along and live in utopian harmony? Maybe Saturday’s show made a tiny step in that direction, but I’m not naive. As a country, we still have a lot of work to do. We need to agree on some basic rules for civil discourse.

There are many ideas that we will never agree on. The left and the right have different ways of approaching governance, based on contrasting philosophies. But many of the ultimate goals — economic prosperity, better health care and education, etc. — are the same. We just don’t share the same vision of how to achieve them.

How, then, do we live together in this world of differing ideas? For starters, let’s agree that the ideas are fair game. If you think my idea is awful, you should say as much. But there is a difference between attacking an idea and attacking the person behind that idea. Labeling someone as an “-ist” who believes in an “-ism” because of the person’s policy preference is just a shortcut to playground-style name-calling, cloaked in political terminology. It’s also generally a good indication that the attacker doesn’t have a solid argument and needs a way to end debate before it has even begun.

Similarly, people too often attack not just an idea but also the supposed intent behind an idea. That raises the emotional level of the debate and might seem like it strengthens the attacker’s side, but it’s a terrible way to make a point. Assuming the worst about your opponents’ intentions has the effect of demonizing their ideas, removing the need for sound counter-reasoning and fact-based argument. That’s not a good environment for the exchange of ideas.

When all else fails, try asking for forgiveness, or granting it. On Saturday, Pete Davidson and SNL made amends. I had some fun. Everyone generally agreed that a veteran’s wounds aren’t fair game for comedy. Maybe now we should all try to work toward restoring civility to public debate.