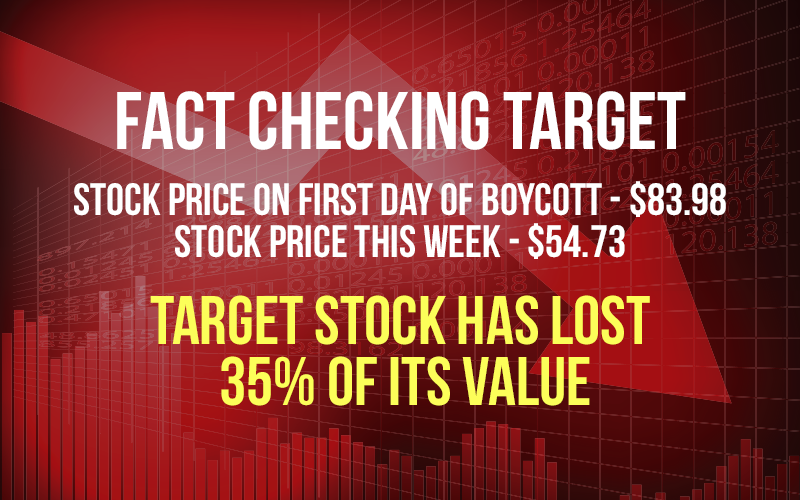 I want to thank you for standing firm against Target’s dangerous bathroom policy. Your commitment to the boycott has been noticed by major companies. One thing is certain, they don’t want what is happening to Target to happen to them.

Somebody needs to tell this to Snopes.com, the fact-checking site so many people depend on for honesty. The site’s appraisal of the Target boycott is well off the mark. Snopes.com is simply repeating Target’s false claims that the boycott is having no effect on the company.

The Snopes.com story includes a quote from Target’s public relations manager Erika Winkels saying the boycott has had no effect on them: “We have made it clear over time that we’ve seen no material impact to the business based on the bathroom policy. We don’t have anything new or different to share.”

I think we can translate this as – Target not only does not care about the safety of their customers, but they do not miss the 1.4 million families who are boycotting them and it seems they simply do not care enough to invite the boycotters back to Target.

FACT: Despite Target’s denial, the boycott is dealing a crippling financial blow to the company. Since it was launched in April 2016, Target has seen a significant drop in foot traffic to their stores. Effects of the boycott are also clear in Target’s financial report released February 28. The report reflected a dramatic drop in Target’s sales and earnings during October, November, and December.

FACT: Snopes.com ignores the assessment of others outside the corporation. Here are some recent news headlines…

Together we are making an unprecedented financial impact on a corporation whose policy is to allow men to use women’s restrooms and dressing rooms. Target’s decision is unacceptable for families, and their dangerous and misguided policy continues to put women and children in harm’s way.

It is urgent the Target boycott reach 1.5 million signers by the end of April. At that point, I will personally return to Minneapolis with an additional 500,000 names. I will then discuss how Target can invite 1.5 million AFA supporters back to their store by having a common-sense bathroom and dressing room policy that links use of these rooms to a person’s biological sex.

Help us reach the 1.5 million signature mark. If you haven’t signed the boycott pledge, please sign it today! If you have signed the pledge, please forward this email to your family and friends. Most important: Share this information with your Sunday School class and encourage them to sign the pledge at www.afa.net/target.