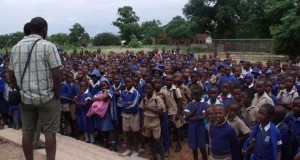 An Arkansas youth soccer coach may be living out the very definition of the American dream, but he hasn’t forgotten his roots and the hardships he faced along the way. Today, he’s giving youths in his hometown the chance to experience something he never could as a boy.

Itayi Pondwa grew up in a small southern town in Zimbabwe, where soccer pitches consisted of dirt fields and he played the game without shoes to protect his feet.

Pondwa and his friends didn’t even have real soccer balls — as a young boy, he would create makeshift soccer balls using plastic bags and filling them with newspaper. “I mean, we had three teams sharing the same uniform,” Pondwa told KATV-TV.

Perhaps the challenges fueled Pondwa’s passion even more because he eventually made a local professional team before coming to the U.S. to play soccer in college, where cleats, green grass and uniforms were plentiful.

All the while, Pondwa was trying to figure out how to give back to his community. “You’re growing up with, ‘If I get out of this situation, if I get a chance, what can I do to help back home?” he said.

Pondwa has been working with central Arkansas’ Maumelle Soccer Club to send used soccer jerseys and equipment to his boyhood team, the Njube Spurs. But, this year, he’s taking it a step further – he’s raised enough money to send a set of brand-new jerseys and 20 soccer balls to the team. “Just receiving that — I think it’s going to be huge for them,” Pondwa said.

Participating in the charitable initiative was a “no brainer” for the organization and a great lesson for the kids, Maumelle Soccer Club President Joshua Clausen told KATV. “It’s really kind of cool to show to our kids that not everybody has it that easy,” Clausen said. “It gives them an opportunity to participate with us – giving back to someone else.”

Player Emma Bless agreed, noting how important it will be for the overseas players to have something of their own.

“I think it’s gonna be so cool for them to have something, for it to be able to be their own,” Bless said.