After investing hundreds of millions of dollars into the failed campaign of Democratic candidate Hillary Clinton, elite liberals and money men gathered in Washington, D.C., to plot a way to bring down President-elect Donald Trump in his term in the White House.

The meeting is the first major gathering of the institutional left since Trump’s shocking victory over Hillary Clinton in last week’s presidential election, and, if the agenda is any indication, liberals plan full-on trench warfare against Trump from Day One. Some sessions deal with gearing up for 2017 and 2018 elections, while others focus on thwarting President-elect Trump’s 100-day plan, which the agenda calls “a terrifying assault on President Obama’s achievements — and our progressive vision for an equitable and just nation.” 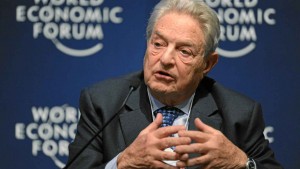 Yet, the meeting also comes as many liberals are reassessing their approach to politics — and the role of the Democracy Alliance, or DA, as the club is known in Democratic finance circles. The DA, its donors and beneficiary groups over the last decade have had a major hand in shaping the institutions of the left, including by orienting some of its key organizations around Clinton, and by basing their strategy around the idea that minorities and women constituted a so-called “rising American electorate” that could tip elections to Democrats.

The Democracy Alliance has fed upwards of $500 million toward liberal activist groups and candidates since Soros co-founded the group in 2005.

All members of DA are required to give $200,000 a year to recommended activist groups and pay annual dues of $30,000 to fund the DA staff and its meetings.

Gara LaMarche, the president of the DA, told donors Sunday evening that some reassessment is in order for the Democratic party. “You don’t lose an election you were supposed to win, with so much at stake, without making some big mistakes, in assumptions, strategy and tactics,” LaMarche said, according to prepared remarks he provided to Politico.

LaMarche would add that the reassessment “must take place without recrimination and finger-pointing, whatever frustration and anger some of us feel about our own allies in these efforts,” and he said “It is a process we should not rush, even as we gear up to resist the Trump administration.”

While focusing on preserving ObamaCare and other achievements of the Obama administration that are threatened by a Donald Trump presidency, the DA’s agenda includes panels on rethinking polling and the left’s approach to winning the working-class vote. The group will also stress funneling cash into state legislative policy initiatives and races where Republicans took over during the election…