The headlines in the Boston Globe and Boston Herald shocked pro-family readers, announcing that the St. Patrick’s Day Parade committee had voted to allow a homosexual group to march. By mid-day the news was around the world – Fox, ABC, CBS, Breitbart, and even Reuters in Europe.

The previous evening, Monday, Dec. 15, the Allied War Veterans’ Council (which runs the parade) met and voted 5-4 to approve the application by OUTVETS to march. That group is described in the press as “a group honoring lesbian, gay, bisexual, and transgender military veterans.”

This was jarring because the annual South Boston St. Patrick’s Day Parade has been the only major parade of its kind in America that has not capitulated to the relentless pressure to include homosexual activist groups.

And the parade organizers had the ultimate legal backing. In 1995, led by then-Council Commander John “Wacko” Hurley, they won a unanimous US Supreme Court decision giving them the right to exclude anyone. And over the years they’ve boldly used that decision to stand up to the political establishment that demanded they give in.

This year, MassResistance worked with the parade organizers to support them against the renewed political and economic pressure against parade sponsors by Boston politicians, homosexual activists, and the media. The pro-family forces prevailed and the parade was a resounding success. But something else happened this time.

The vote – An outrageous manipulation of normal process

Early Tuesday morning (Dec. 16) MassResistance spoke with committee member Philip J. Wuschke, Jr., a former Allied Veterans Commander and the current parade organizer and treasurer, who was at the Dec. 15 meeting. (Much of what he told us was also published in an article later that day in the local Dorchester Reporter newspaper.)

Wuschke portrayed the meeting and subsequent vote as an outrageous effort to manipulate the vote and exclude the clear wishes of the majority of the committee.  According to Wuschke: 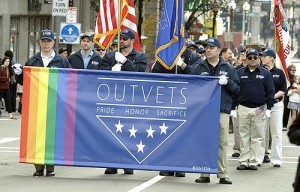 “The Meeting date was changed. The meeting was originally scheduled for Tuesday, but four or five days beforehand, it was suddenly moved to Monday and the mailed notification of the change only reached some of the members. Also members were not notified that the vote on OUTVETS would be taking place at that meeting.”

Wuschke told us that he, “knows of at least five absent members who would have come and voted emphatically against this, had they known. Plus, John “Wacko” Hurley, the longtime Allied Council leader and strong advocate of the long-standing policy, told the press that because of illness he missed his first meeting in 50 years!”

Wuschke also pointed out “that the 5-4 vote was not technically legal because only nine members were in attendance, but an official quorum requires 12 members.” In addition, he said, “the bylaws specifically prohibit any group from marching that identifies itself by its sexuality, or carries signs or banners that do so.”

The driving force in the capitulation: the Allied Council Commander

This did not happen in a vacuum. The meeting and vote followed a period of “negotiation” between various elected officials, the Mayor’s office, some “community” organizations, and the Council to include a homosexual group, according to press reports. According to the Catholic Action League, it also included Congressman Stephen Lynch, and State Representative Nick Collins, both South Boston residents.

But in the end, we were told emphatically that the driving force was the Allied War Veterans Council Commander, Brian Mahoney. Mahoney appears to have been completely swayed by the pressure and decided that the parade needed to abandon its policy even if a majority of the members disagreed. He had reportedly also been seen meeting with local gay groups.

Along with a group of four other committee members, including Ed Flynn, son of the former Mayor of Boston, Mahoney was able to change the policy.

Mahoney tells press after the vote: They’re not really a gay group

In his remarks to the press afterwards, Brian Mahoney, was clearly pleased about the vote and contemptuous of those who disagreed. “Who are we to judge?” he told the Boston Herald.

But mostly, Mahoney tried to claim that OUTVETS is not an LGBT group. “To us, it’s a group of veterans that wanted to march and deserved to be honored,” he told the press. He added that the group “has no social or political agenda,” and described their banner as including a “pallet of color” that “some might see as a rainbow.”

However, the leader and founder of OUTVETS, Bryan Bishop, was more honest. “I want to draw awareness to the LGBT veterans,” he told the Boston Herald, admitting that the common theme of the group is homosexuality.

It appears that this scenario was planned well in advance, with the collusion of Council members and powerful politicians.  OUTVETS appears to be a contrived group organized just for this purpose.

Since being elected last year, Boston Mayor Marty Walsh put considerable energy into attempting to force the parade to include homosexual groups. As a State Rep, he had described his vote for gay marriage as “the proudest moment of my career.” This was his new challenge.

OUTVETS was formed just this past September. According to the Boston Globe article, Bryan Bishop, the founder and organizer of OUTVETS, works for Mayor Walsh as a city employee.

The group marched in the City of Boston Veterans Day parade in November, then applied for the South Boston St. Patrick’s Day Parade.  The “negotiations” with local politicians appear to have been focused on getting this group into the South Boston parade. The manipulated vote appears to have been a planned result of that.

Almost immediately after the vote, the Mayor’s office released this statement:

“We’re very pleased that OUTVETS will be marching in this year’s parade. Mayor Walsh has been advocating for an inclusive parade for quite some time. We’re thrilled to hear that the South Boston Allied War Veterans Council have decided to make the 2015 parade an inclusive event.”

This did not sit well with religious Catholics in Boston. On Tuesday, C.J. Doyle, of the Catholic Action League also released a statement:

“This was an illegal vote, at a meeting without a quorum, conducted by a suborned minority, subservient to outside political interests, who deliberately failed to notify the Council majority of the measure to be acted upon. No one, of course, should be surprised by such tactics, given the manifest contempt homosexual groups and their political enablers have always shown towards the democratic process.”

It also appears that the local media knew about it beforehand and was ready to run with it. Wuschke told us that while driving home from the vote he was already getting multiple phone calls from the press asking for comment. News rarely travels that extraordinarily fast.

We’ve been told that the level of anger among members of the Allied War Veterans Council over this is considerable. It was a sleazy, undemocratic process meant to subvert the will of the majority.

John “Wacko” Hurley, the legendary leader and member of the Allied War Veterans Council for over half a century, has resigned, according to sources. Other prominent members are expected to follow in the coming days and weeks, we’ve been told.

For the last 25 years the Immaculate Heart of Mary Catholic School in Still River, MA, has provided what has become the most memorable float in the annual South Boston St. Patrick’s Day Parade – St. Patrick blessing the crowds. This has become the centerpiece of the event and is widely photographed. The school band has also marched in the parade. 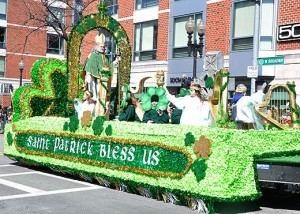 According to C.J. Doyle, Br. Thomas Augustine, the school’s principal, has emphatically stated that they will not be a part of the parade because of this decision. Br. Thomas has been public about this in the past — and we applaud him for standing by his principles. The absence of this group will change the character of the parade, many believe.

And there are numerous religious schools and Catholic groups that regularly come from as far away as Florida to march in the parade. We suspect that many of them will also pull out.

We expect that other local LGBT groups who have worked hard in the past to be in the parade, such as MassEquality and gay Catholic groups, will now find the doors opening. It’s not a stretch to speculate that over time the parade could become more like the Gay Pride parade and less a family-oriented religious parade.

As CJ Doyle observed, once groups can carry signs and banners identifying their sexual behavior, much more will follow.

Can this vote be overturned? Not likely.

Wuschke and others explored several avenues for dealing with this, but now seem resigned that nothing can be done. As usual in these battles, the other side is resolute not to give up anything.

Mahoney has been emphatic that the vote is final, we’ve been told, and that a subsequent meeting will not be able to overturn it. He’s said that as Commander he controls the meetings and the agendas. The Parliamentarian, who was one of the “yes” votes, has ruled that the quorum question is not an issue because it’s regularly been ignored.