UN peacekeepers and the U.S. Embassy failed to intervene during the targeted attack

(WNS)–South Sudanese troops raped and assaulted several foreigners and aid workers in a hotel complex, singling out Americans, after winning a battle last month against opposition forces, witnesses told the Associated Press. UN peacekeepers and several embassies, including the U.S. Embassy, failed to respond to the calls for help.

On July 8, renewed fighting began between the armed forces of the warring President Salva Kiir and Vice President Riek Machar. Throughout the weekend, bullets flew through the Terrain hotel compound, a facility frequented by foreigners and South Sudanese elites. By July 11, the government forces had nearly defeated Machar’s troops and both parties prepared to call for a cease-fire. 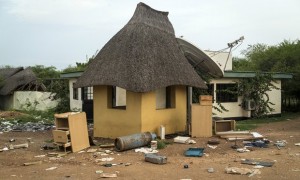 After the battle, government forces made their way into the Terrain complex and began a rampage that lasted nearly four hours. Residents said the building shook as soldiers shot at the metal door of a two-story apartment block in the compound. One Ugandan staff member said he saw between 80 and 100 men break open the gate and go door-to-door, harassing guests and collecting items.

“They were very excited, very drunk, under the influence of something, almost a mad state, walking around shooting rounds inside the rooms,” one American said.

The soldiers went on to assault, rape, and shoot people. A report by the hotel’s owner said the soldiers raped at least five women, and carried out torture, mock executions, beatings and looting. One Western aid worker said 15 soldiers raped her.

Several survivors said the soldiers specifically asked if they were American. The soldiers beat one American with belts and the butts of their guns for about an hour. “You tell your embassy how we treated you,” the soldiers said when they released him.

Kiir’s side declared a ceasefire at 6 p.m., but the assault at the Terrain continued. Gian Libot, a Philippine citizen who witnessed the attack, said one soldier ranted against foreigners. “He definitely had pronounced hatred against America,” Libot said. He recalled the soldier accusing Americans of messing up the country and saying UN officials support the rebels.

The soldiers shot dead John Gatluak, a South Sudanese journalist who worked for the USAID-funded Internews. Gatluak’s tribal marks revealed his identity as a Nuer, the same tribe as the opposition leader, Machar. The soldiers pushed him to the floor and beat him, one woman said. One soldier shouted “Nuer,” and another soldier shot him twice in the head. He shot him four more times as he lay on the ground.

People in the compound began sending messages by text, Facebook, and via emails when the attack began. “All of us were contacting whoever we could contact,” said the woman raped 15 times. “The UN, the U.S. Embassy, contacting the specific battalions in the UN, contacting specific departments.”

“Obviously, we regret the loss of life and the violence that the people who were in Hotel Terrain endured, and we take this incident very seriously,” said Farhan Haq, the deputy spokesman for the UN secretary-general. “As you’re aware, we have called on the national authorities to investigate this incident thoroughly and to bring the perpetrators to justice.”

U.S. State Department spokeswoman Elizabeth Truedeau told reporters the U.S. Embassy “was not in a position to intervene,” after it received several calls for help. Trudeau said the U.S. ambassador reached out to local government officials instead.

South Sudanese security forces eventually entered the hotel compound and rescued all but three Western women and about 16 of the hotel’s staff. A private security firm rescued the remaining people the next morning.

“South Sudanese leaders have time and again failed to end abuses against civilians, been unwilling to rein in abusive forces or ensure justice for crimes by those under their command,” said Daniel Bekele, Africa director for Human Rights Watch. “Top leaders need to be sanctioned and an arms embargo imposed.”