Baby boxes and safe-haven laws save thousands of babies worldwide, but they stir controversy in South Korea 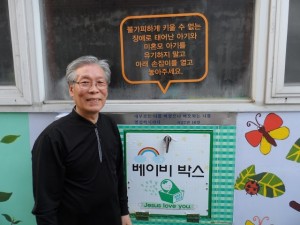 (WNS)–Jusarang Community Church is a timeworn building burrowed deep within twisting alleys up a hilly working-class district in Seoul. If not for the pastel rainbows and meadows painted on its walls, the church would blend inconspicuously into the residential neighborhood. Over the last several years, however, the church has become famous—and infamous—as home to Korea’s first “Baby Box.” It’s where desperate women from all over the country come to drop off their newborn babies.

South Korea isn’t the only developed nation with foundlings. The archaic baby box concept has been spreading in other postmodern nations like Germany, Austria, Poland, Switzerland, Czech Republic, and Canada through independent entities, many existing in legal limbo. Even in the United States, babies are still abandoned unsafely, and in extreme cases tossed down chutes, into toilets, out windows.

Tim Jaccard wept over many such lifeless tiny bodies while working as a paramedic for the Nassau County Police Department in Long Island, N.Y. To give these babies proper burials, he founded the AMT—short for Ambulance Medical Technicians—Children of Hope Foundation in 1998. His mission has since evolved: pushing for state laws allowing parents to give up a newborn child legally and anonymously to state-designated “safe haven” locations such as police stations and hospitals—no questions asked, no legal repercussions.

These “safe-haven” laws provide a streamlined process for babies to be safely relinquished. So long as the baby is unharmed and within a certain age (which varies by state from 72 hours to a year), the parent is free to leave immediately. Some parents linger to provide medical history, but that’s optional. Most state laws allow parents to recover the child within a specified period of time.

A safe-haven baby receives medical care within 24 hours with full Medicaid coverage. The state’s child welfare system then takes custody. It verifies that the baby is eligible for adoption by searching for matches in kidnapping cases and allowing fathers to claim custody. On average, the process between relinquishment to permanent placement into foster care or adoption takes six months.

Texas enacted the first U.S. safe-haven law in 1999. Today, all 50 states and the District of Columbia have versions of the law. In the past 15 years, about 2,900 babies have been relinquished to safe-haven locations. Though no official record of abandoned babies exists, Jaccard’s organization documented 720 cases of illegal abandonments nationwide from 2003 to 2014—a “dramatic decrease” from previous years, he said.

Back in Korea, the Jusarang Community Church’s Baby Box survives by slipping through a legal crack: Seoul has no outright ban against the operation, nor does it provide any financial support. 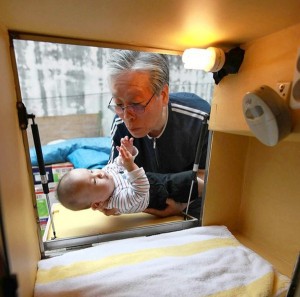 Jusarang pastor Lee Jong-rak created the Baby Box in late 2009 after rescuing his third abandoned baby. The mother had tucked her baby into a cardboard seafood box and left it by the church gate on a cold autumn night. By the time Lee picked up the baby, the body was stone-cold and reeking of fish. From the corner of his eye, he spotted a cat slinking around. A chill ran down his spine. He thought, “What if the cat had attacked the baby? What if the baby had frozen to death? We need to build a safe place.”

So Lee built into the wall of his church a hatch that opens a tiny incubated, blanket-lined box. He rigged it so that a bell rings inside the church whenever someone opens and closes the door. Then he waited.

In March 2010, the Baby Box bell rang for the first time. Though he knew what to expect, Lee was still shaken to discover a pink-faced boy wrapped in a mangy towel. Staff members burst into tears as he carried the child into the church. They named the boy Moses.

In South Korea, babies like Moses create a tangle of social and political issues for policymakers. Baby dumping is punishable by law, but many mothers risk it because unwed and single mothers face a lifetime of shame and rejection, and receive meager government support (about $48 per month). The Baby Box seems like the only way to escape a lifetime of discrimination and poverty.

In August 2012, though, the South Korean government revised the Special Adoption Law (SAL) to ban the adoption of unregistered babies. The move was an attempt to make international adoptions more transparent and reduce the possibility of fraud. The changes require birth mothers to keep their newborns for at least seven days before placing them for adoption. It also mandates they register their babies in their documents until they are adopted.

Mothers who fear family and social repercussions do not want to risk keeping their babies for seven days—nor are the children ever likely to be adopted. That’s one key difference between South Korea and America: Nearly every baby relinquished through the American safe-haven laws gets adopted, including those with significant disabilities, whereas most of Korea’s Baby Box infants end up in children’s homes.

Domestic adoption is culturally unpopular in Korea. For babies with disabilities, the possibility of domestic adoption is even bleaker. Previously, when people did adopt, they almost always lied about the baby’s origins, registering the child as biological. The new SAL also outlaws that. Domestic adoption dropped 39 percent between 2012 and 2013.

Almost immediately after the law went into effect, Lee and his staff saw an increase in baby abandonments. They had been accustomed to hearing the bell ring each month, but when the bell began ringing up to 25 times monthly, sometimes several times a day, Lee and his staff became overwhelmed, anxious, and angry. Their small-scale, family-owned operation can barely keep up with the number of babies who require 24/7 care.

The numbers tell the story: In 2010, Jusarang Baby Box received four babies. The number increased to 37 in 2011, then 79 in 2012 as the operation drew nationwide media attention. But after the SAL revision in late 2012, the number of Baby Box babies swelled to 252 in 2013. Almost half the mothers left letters specifically blaming the new law as the main reason they turned to the Baby Box. According to government data, the number of abandoned infants nationwide more than doubled from 2012 to 2013.

The Baby Box is not the end of the Jusarang story. The church provides outreach for birth parents, albeit informally. After depositing her baby, a mother sometimes loiters long enough for Lee to invite her in, offer comfort, and explain the gospel. Lee encourages the mother to come back for her baby, and 120 birth mothers have reclaimed their babies. Jusarang currently sends material support to 18 such mothers. Touched by Lee’s work, many volunteers have also professed Christ.

Baby boxes and safe-haven laws have their critics who contend that anonymous relinquishments only encourage parents to discard their newborns without consequence. UN officials say safe-haven laws violate a child’s right to know his identity.

As the debate continues, Lee battles to keep the Baby Box open. He told me, “I cannot stop this work. God gave me this work to do. So I just need to stand right before Him, and He will provide all the things I need.” His ministry has inspired several pastors in other cities to start their own Baby Box—but at least one church in Busan has caved in to fierce opposition from the neighborhood and city authorities.

Lee, however, refuses to buckle, getting by each month through the help of private donations and volunteers. He reasons: “Why should I sit behind a desk, squabbling about consequences, when human lives are drowning?” Then he shook his head and sighed: “What a strange period we live in, where trying to save and protect lives is getting more difficult.”