State of the Ark Park

At a new Kentucky theme park, Christians are the ones getting taken for a ride. Construction is already underway in Williamstown for a one-of-a-kind tourist attraction by our friends at Answers in Genesis (AiG). The organization behind the Creation Museum is working on a built-to-scale Ark Encounter — but so far, all they’ve encountered is intolerance.

Ken Ham, the group’s President and CEO, had the support of plenty of key leaders to bring Noah’s story to life, including Governor Steve Beshear (D-Ky.). But now, after pressure from a few vocal secularists, the state is stripping the tax incentives it gave preliminary approval to last year. Under a new Kentucky law, projects like AiG’s are eligible for huge tax rebates, upwards of $18 million in this case. Essentially, this is money that would be returned to the theme park over a period of 10 years from sale taxes they collect.

The state had given AiG the thumbs up on its application last fall, which triggered some outcry from anti-faith groups. Almost immediately, they swooped into Kentucky and started making noise about the rebate, demanding that it be retracted. Why? Because AiG dares to hire people who share their beliefs on creation. And as a religious organization, that’s entirely within both state and federal law. Do we force animal rights groups to hire hunters? No. Or Muslim groceries to hire pig farmers? Of course not. So why is Ham’s group being targeted? 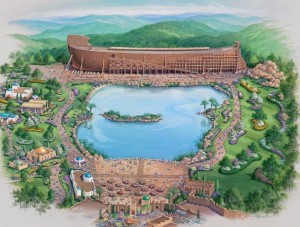 Good question — one the organization hopes the federal courts can answer. From the moment the 510-foot ship was announced, atheists have tried to sink the project. Now, they’re twisting the arms of the state to adopt their own narrow views. Unfortunately, Kentucky complied after the Freedom From Religion Foundation and Americans United for the Separation of Church and State launched an organized push for the IRS to investigate. Within weeks, the state reneged on its tax offer.

AiG tried — unsuccessfully — to resolve the matter with the state before heading to the courts. Now, after exhausting all of his options, Ham is suing the state for singling out the religious group for discrimination. “The state granted its preliminary approval for the incentive. Only after the atheist groups objected and publicly attacked the state’s preliminary approval, did the state renege on its commitment,” Ham explained. “Our organization spent many months attempting to reason with state officials so that this lawsuit would not be necessary. However, the state was so insistent on treating our religious entity as a second-class citizen that we were simply left with no alternative but to proceed to court. This is that latest example of increasing government hostility toward religion in America, and it’s certainly among the most blatant.” Mike Johnson, chief counsel of Freedom Guard, is representing the group. Like us, he thinks the state is setting a dangerous and unlawful precedent.

Constitutional questions aside, with as many as 700,000 people expected at the Ark each year, the benefits for Kentucky far outweigh any perceived slights in hiring policy. Leaders created these tax breaks as a way to bring more people to the state — and now that one organization is actively trying, they’re being told no because of their religious orientation. And, as we’ve seen with frightening frequency, politicians like Beshear (either of their own accord or under the threat of legal action from atheists) are telling Christians that surrendering their beliefs is the price of doing business.