The treatment is called Miracle Mineral Solution, and one couple that bought it learned that a miracle is necessary today — to keep the government out of your life. Because that couple, Hal and Michelle Stanley, have just had their children seized for owning that product, even though it is reported to be a legal mineral supplement. Natural News has the story:

Recently, government thugs in Hot Springs, Arkansas raided and searched the home of a couple who were in possession of a simple mineral supplement called Miracle Mineral Solution.

Law enforcement officers of Garland County, Arkansas served a search warrant on the Stanley home — yes, possession of a legal, medicinal mineral supplement is now grounds for being searched by the government — where they took the family’s seven children by force. 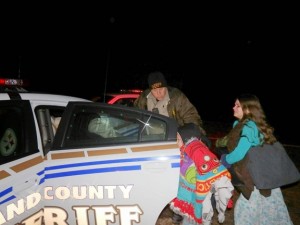 The scene that Monday, January 12, was a frightening one. “‘Policemen here, policemen here,’ Hal Stanley pointed, standing on his front porch. ‘Over here, on the side roads full of policemen,’” reported ArkansasMatters.com. The site continued, “Stanley opened his door Monday afternoon to find a warrant waiting for him and his home surrounded by State and Garland County agents. ‘It said we’re here to search your house,’ Stanley explained. Hal and his wife Michelle were kept outside for hours while officers searched the home with their seven children inside.”

The Stanleys aren’t accustomed to police contact, either. Hal says they’ve never had problems with the law — that he has never had a speeding ticket. In fact, he states that even beer and liquor are off limits in his home.

The same cannot be said of government intrusion, however. During the search of the Stanley’s residence, an ambulance was brought to the scene, and each of their children was examined. They were found healthy, and their living conditions were judged excellent. As one of the agents on the scene put it, Michelle tells us, “Oh, this is nice and your kids are great.” This gave the couple hope that this would be the end of it.

It was not to be. At approximately 9:30 p.m. January 12, the state showed up again. Reports WND.com, quoting Michelle, “Eventually ‘6 intimidating brute looking males and 1 DHS [Department of Human Services] female all lined up in our den to tell us they would be taking our kids into their custody for 72 hours.’”

Yet the children are still in the state’s custody more than a week later. Not surprisingly, the DHS would not comment on the case except to confirm the children had been seized.

All of this, ostensibly, is over the Miracle Mineral Solution (MMS), which Hal says he readily would have admitted possessing and would have turned over to the authorities, if they’d only asked. Moreover, while the substance — which has been billed as having ameliorative effects in cases of multiple sclerosis, Alzheimer’s, and Parkinson’s — has not been approved by the FDA for human consumption, Hal says only he has taken it and that they generally use it to purify water for their garden.

Whatever the case, the Stanley children’s robust health attests to the care they receive. And as for any notion that having a “dangerous chemical” in the home justifies the government’s actions, WND.com related a good point, writing:

At a website called Medical Kidnap one reader, Jacquie Trump, noted that government authorities, under the standard used against the family, should lose their own children, because “there are dangerous chemicals in their own homes.”

“Bleach, draino, toilet bowl cleaner, tylenol, stain, varnish, glues and the list goes on and on. It is criminal that this gestapo organization can break into your home and terrorize anyone at anytime over anyone reporting anything.”

This is yet another reason why many say the MMS angle was just a pretext, that the real reason for the children’s seizure was the Stanleys’ politically incorrect lifestyle. As Natural News also wrote:

This is also a war against home schooling because the couple’s children are all being home schooled.

The Stanley family is not just into home schooling; they’re also into preparedness, natural medicine, home gardening and all the other essential life skills that the tyrannical government in America is trying to crush or outlaw.

This suspicion that there was an ideological motive was only reinforced by a young deputy who, when asked by the Stanleys who made the judgment to seize the children, said that he did and that he was “proud of the decision.”

Yet there may be even more to the case. As The New American (TNA) reported in December:

Every time CPS [or DHS, in the Stanleys’ case] seizes a child, it gets money from the federal government. Lots of money. And critics have warned that this has a corruptive effect.

Did you know that the money funneled to states and child protective services actually encourages them to accuse you of child abuse and even murder, and to take your children, even if you’re not guilty, and even though they have absolutely no proof that you harmed your child?

Horrendous as it sounds, it’s true: child abuse has become a business — an industry of sorts — that actually pays states to legally abduct your children and put them up for adoption!

Yet the story gets even worse. Quoting Michael Minkoff, a father who alleges his kids were unjustly taken by CPS, we also wrote, “Likening many American local governments to the Chinese regime — which has been accused of stealing children to profit from selling them for adoption — he levels a serious charge: CPS standards for seizing children aren’t just governed by whether they’re abused, but also whether they’re ‘marketable.’” Minkoff then related:

While we were in LA fighting to get our children back, a little black boy was beaten to death by his step-father. Neighbors had called CPS six times over the course of a few months. No one ever showed up.

Do you know how many calls it took for someone to show up and take our beautiful white baby twin girls? One call. And CPS took them on the basis of one person’s testimony. And we were assumed guilty from the start. Three months later, the case was dismissed and not a single claim was upheld, yet LA County got three months worth of Federal money out of our kids, and so far, they got it with impunity. In fact, if it hadn’t been for God’s grace and good lawyers, we might have been fighting for much longer to no avail.

And as with the children of Cleave and Erica May Rengo, whose case TNA also reported on last year, the Stanley kids fit the CPS/DHS profile of the “adoptable,” money-making child: They’re white, healthy, and some are quite young.

Whatever the state’s motivation, Michelle Stanley characterizes the government’s actions in no uncertain terms. In an e-mail released by Health Impact News she said, “The DHS has come and stolen our kids from us under the guise of ‘protecting our children.’”