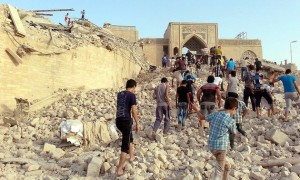 (WNS)–Islamic State militants have destroyed tombs long ascribed to the Old Testament prophets Jonah and Daniel recently in Mosul, according to eyewitness reports and video footage posted on YouTube. The demolition came as the Sunni-led, al-Qaeda-linked militants—who stormed Mosul June 10 and have since occupied Iraq’s second largest city and the surrounding area in Nineveh province—also demolished tombs and related sites sacred to Shiite Muslims. Already the fighters have chased thousands of Christians out of Mosul, confiscating their homes and belongings.

In addition—according to Archimandrite Emanuel Youkhana, an Assyrian Christian leader who heads the Christian Aid Program in northern Iraq—Islamic State fighters have seized all 30 churches and monasteries in the Mosul area, removing their crosses and burning or destroying many of the buildings. They have converted to a mosque the Syriac Orthodox Cathedral in Mosul’s Al Shurta district, Mar Ephraim, installing loudspeakers issuing calls to Islamic prayer. Two ancient monasteries have been looted and their residents forced to convert to Islam or be killed, forcing them to flee into exile farther north.

“What comes next is a real concern,” Youkhana said in an email. “Our fears are that all the churches, Ancient Assyrian archeological sites, Mosul Museum, and other sites will have the same thing happen. This is a huge loss for human beings everywhere.”

Islamic State militants also are targeting non-Sunni Muslim communities, and Youkhana said he believed all Yezedis, a minority Kurdish religious community, have been forced out of the area since June.

In a further sign of Islamic State brutality, reports emerged yesterday that the terror group is ordering women ages 11 to 46 in and around Mosul to undergo female circumcision. The BBC and Al Jazeera quoted a top UN official who said that militants controlling the city since June issued the decree, which could affect 4 million women.

“This is not the will of Iraqi people, or the women of Iraq in these vulnerable areas covered by the terrorists,” said Jacqueline Braddock, the UN’s resident and humanitarian coordinator in Iraq. The decree was posted on Twitter, but several sources in Iraq have questioned its authenticity.

Female genital mutilation, a ritual cutting and suturing of women’s genitals, has been practiced by some groups in Africa, the Middle East, and Asia as way to prepare women for marriage. It poses many health risks: severe bleeding, infection, problems with urinating, and increased risk of newborn deaths in childbirth. Its practice in Iraq is not common or widespread, and many countries have banned it in recent years. The UN approved a resolution calling on member states to ban the procedure in 2012.

Events have reached a point of madness in Iraq. With the worst atrocities and injustices being carried out in broad daylight, the Obama administration is determined to pretend that the Iraq war did not happen—that thousands of American families didn’t commit their loved ones to serving there, that lingering security pacts no longer exist, that the United States having been the primary force for change there for almost a decade has no control over events, and that it can feign indifference without consequence.

Since the Islamic State ordered the ethnic and religious cleansing of Christians (mostly Assyrians in a city long a mix of Arab, Kurd, Turkmen, and Assyrian) a week ago, President Barack Obama has made no statement on those events. The silence is deafening, considering that former military commanders and Democrats are vocally taking issue with the president’s posture, and that Muslim leaders in Mosul have spoken against ISIS. One, University of Mosul law professor Mahmoud Al-Asali, was killed as a result of his outspoken opposition of the terrorists’ reign.

Newspapers have noted the void, with the British Spectator saying, “The mass culling of Chaldean and Assyrian Christians brings out in Obama a streak of insouciance and laid-back cowardice that is very much his own.”

The lack of concern is more striking considering the way Obama and the State Department under Hillary Clinton, both Democratic leaders affiliated with Christian churches, stood up for Muslim Brotherhood extremists in Egypt, joined a NATO war on the side of Muslim revolutionaries in Libya, and have sided with Islamic State affiliates in bringing down the Bashar al-Assad regime in Syria.

Thus far this week the only reaction to ethnic and religious cleansing in northern Iraq has been from the State Department. One week ago it issued a statement calling “abominable” the Islamic State’s announcement “that Christians in Mosul must either convert, pay a tax, leave or face execution.”

When deputy spokesperson Marie Harf was again asked about the situation on Monday, she repeated that statement. Asked if there had been any change since Friday, she said, “No. … All about consistency here.” Asked on Tuesday if the State Department was equipped to deal with the persecution of Christians in Iraq, she said, “Well, we’re very well-equipped to deal with this kind of issue. We have a number of people working on it. I don’t have an update for you on that. I’m happy to check.”

Early on in the war U.S. officials and military commanders recognized that Mosul was strategic to overall security in the country—given its mix of ethnic and religious groups, a progressive and thriving business climate, low crime rate, proximity to oilfields, and welcome of U.S. troops. In 2004, troops under Gen. David Petraeus, then commander in the north, walked the streets and mingled with locals freely, even at night. In Mosul under Petraeus, U.S. troops first stood up the Iraq Civil Defense Corps, a homegrown security force of Kurds and Arabs that successfully trained and policed alongside the 101st Airborne Division.

Now those gains—along with the ancient mix of the population itself and its vast archaeological treasures—has been lost. U.S. opportunities to impose a no-fly zone (as it did for 10 years over northern Iraq between the two Gulf wars), to carry out surgical air strikes to weaken the Islamic State and protect civilians, or to send any kind of aid or military assistance to Kurdish forces are dwindling. And, at any rate, as Christians and other minorities disappear from lands they have occupied for nearly 2,000 years, none of those options to protect them are apparently on the table.