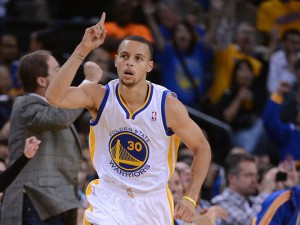 Golden State Warriors guard Stephen Curry (30) looks on from the bench during the fourth quarter of the game against the Portland Trail Blazers at the Moda Center at the Rose Quarter on Feb 19, 2016 in Portland, Oregon.

Steph Curry has never been shy about his Christian faith as an NBA star, but that doesn’t mean he will quote Bible verses in every interview either.

While gracing the cover of the new May/June 2016 issue of the Fellowship of Christian Athletes FCA Magazine, Curry explains that he won’t always have a Bible verse to share publicly.

“I’m not a guy who’s going to be trying to bash people over the head with the Bible,” he said in the magazine. “I want people to know when they see me play that something is different, that I play for something different, and whether I’m talking about it [or not], I just hope by the way I carry myself and by the way I play the game, they can see there’s something different about that guy. And they find out what it is and then they know. It’s part of who I am.”

Still, Curry insists that his faith plays a vital role in his professional career where he just made history with a second consecutive NBA MVP honor, achieved by a unanimous vote.

FCA magazine editor Clay Meyer spoke about how proud the organization is of Curry’s accomplishments.

“We at Fellowship of Christian Athletes couldn’t be happier for Stephen Curry on his second straight NBA MVP honor. It’s especially heartwarming to know that a basketball star as powerful as Curry can also be grounded in his faith and in his commitment as a teammate, father and community leader,” Meyer wrote. “Here at FCA, we love to tell the amazing stories of those who have put Christ first in their lives and have kept biblical principles and FCA values at the forefronts of their careers. Stephen Curry is a tremendous example to kids and gives them a godly and positive role model to follow. We couldn’t agree more that he is the ‘new face of the NBA,’ and we’re honored once again to feature one of the biggest names in all of sports in FCA magazine and tell his awesome story to fans around the world.”

Curry built his spiritual foundation at a young age. According to the Christian athlete, his relationship with Jesus Christ started around middle school.

“My parents had us in church every Sunday, every Wednesday. It was more of a tradition at that point; I didn’t have a personal relationship with the Lord until I went to the altar call one Sunday and the youth pastor told us to make a decision for ourselves,” Curry previously told Active Faith. “The youth pastor told us we had to make a decision for ourselves, we couldn’t rely on our parents. It had to be a decision on our own, and that’s when I made it.”