LOS ANGELES – I’m Not Ashamed, the beloved film that tells the heroic story of Rachel Joy Scott, the first victim at Columbine High School, is now available on, Blu-ray™ combo pack, DVD and On Demand, and Digital HD.

The film, based on Scott’s journals, tells the story of a teen-aged girl who struggled with family issues, peer pressure, boys, and mild depression. Deeper though, is the story of a girl who struggled to live out her faith in God, to take it from an internal belief system to a daily practice that was reflected in the way she treated others. Scott was known among the halls of Columbine for being a Christian and for treating others with kindness. The film follows Scott through her struggles, as she works to discover herself and to spread kindness to those around her to the ultimate end of her life when she refused to renounce her faith in God. 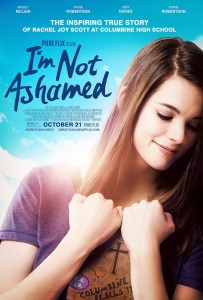 “It was an honor to make a film about Rachel’s amazing life,” stated Director Brian Baugh. “I’m very thankful to the cast and crew who were so passionate and devoted to the great responsibility of telling her story. We were fortunate to have the freedom from Rachel’s family to not have to sugarcoat things and to be real about her ups and downs. The film sends the hopeful message, that no matter what you’ve been through, that your compassion for others can make a powerful impact in this world.”

“As Rachel’s mother, I am grateful that the life of my daughter was portrayed in an authentic way through the movie I’M NOT ASHAMED,” stated Beth Nimmo. “This movie shows real conflicts and struggles that Christian teens face everyday. It is a true story of how Rachel worked through those issues, sometimes getting it right, sometimes falling short of what she wanted to do or who she wanted to be. This story is not one of tragedy, but one that gives hope, courage and the ultimate triumph of being with the One she loved the most, Jesus Christ. My prayer is that those who see this film will be inspired to live their life to the fullest.”

I’m Not Ashamed is rated PG-13 (for thematic material, teen drinking and smoking, disturbing violent content and some suggestive situations) and directed by Brian Baugh (To Save a Life, The Ultimate Gift). The film is produced by Benny Proffit, Bodie Thoene, Robin Hanley.

DVD and Blu-ray™ combo pack bonus materials include never before seen footage, interviews with the cast and more. For additional information log on to www.imnotashamedfilm.com.