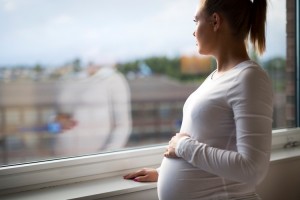 Thoughtful pregnant woman looks out the window home. Holding a hand on the tummy. Mental health and pregnancy.

(WNS)–It may be no Research contradicts narrative advocates that a new study published in the July 2016 issue of the peer-reviewed journal Sage Open Medicine confirms women who have abortions run a significantly increased risk of mental health disorders and substance abuse. But the research offers an important boon to pro-life groups in the United States, where scientific evidence showing the harmful consequences of abortion for women has been scarce because available data is inconsistent and limited.

The Centers for Disease Control and Prevention (CDC) does not require states to submit abortion data. Each state sets its own reporting laws and many don’t report at all. States that do provide information have no uniformity in the type of data they submit.

An extensive analysis of state abortion reporting, published by the Charlotte Lozier Institute in August 2016, found abortion reporting is weakest in states that rank highest in abortion rates, including New York, Maryland, the District of Columbia, New Jersey, Florida, and California.

Because researchers have no reliable way to track abortion information, most studies they conduct on the topic have been statistically flawed. In 2008, an American Psychological Association task force conducted an evaluation of the scientific studies on abortion and mental health difficulties published since 1989. They found the majority of studies suffered from severe methodological problems.

“None of the literature reviewed adequately addressed the prevalence of mental health problems among women in the United States who have had an abortion,” the group concluded.

But in the present study, Paul Sullins, an associate professor of sociology with the Catholic University of America, did not rely on spotty statistics from the CDC. Instead, he analyzed data collected from 8,005 women in the United States, ages 15 to 28, who participated in the National Longitudinal Study of Adolescent to Adult Health. The study followed these women over the course of 13 years.

Sullins analyzed statistics for four groups of women: those who had given birth, those who had a voluntary abortion, those who experienced an involuntary loss of pregnancy, and those who had never been pregnant. He compared the four groups for seven mental health issues: depression, anxiety disorder, suicidal ideation, nicotine dependence, alcohol abuse, illicit drug abuse, and cannabis abuse.

The results showed women who had abortions were at a 45 percent increased risk of subsequent mental health disorders. And women who gave birth had a 0.66 lower rate of mental health problems than any of the other three groups.

Pro-abortion activists often negate studies that link abortion with subsequent mental health difficulties by accusing the researchers of failing to consider factors that might cause a woman to seek abortion and might also predispose her to mental health problems. They cite such things as a prior history of mental illness, rape, intimate partner violence, and effects associated with any pregnancy, such as hormonal changes. But Sullins took these factors into consideration in his analysis and still found that, “of the four groups which comprise all the logically possible outcomes to pregnancy, only abortion was consistently associated with higher risk of mental disorder.”

The results of this study may have implications for American abortion laws. According to Sullins, not one single study has documented mental health benefits of having an abortion. But the federal government does not permit states to prohibit even late-term abortions if the abortion is deemed necessary to preserve the life or health, including mental health, of the mother.

“The assumed premise of these arguments is that procuring an abortion will result in less anxiety, constraint, pain, and mental distress than will bringing a pregnancy to term,” Sullins wrote. But the present study shows that premise isn’t supported by scientific evidence.